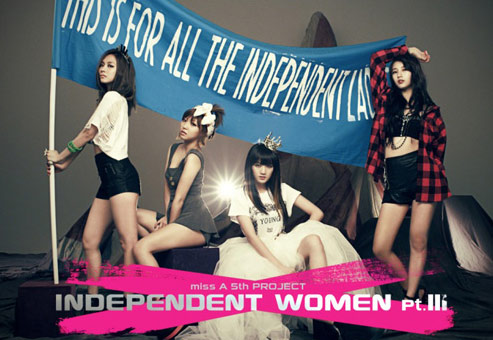 Miss A to make a comeback with ‘INDEPENDENT WOMEN PT.Ⅲ’

By The Editor | October 9, 2012
FacebookTwitter
SubscribeGoogleWhatsappPinterestDiggRedditStumbleuponVkWeiboPocketTumblrMailMeneameOdnoklassniki

Popular idol group Miss A will finally be returning to the music scene with their upcoming fifth project, Independent Women pt. III.

The girls have confirmed their comeback and have also released details of the upcoming mini album. Independent Women pt. III is inspired by Destiny Child‘s hit single, Independent Women. It will also feature five new songs which includethe title track Can Live Without Men, Ma Style, If I Were A Boy, Madness (ft. 2PM’s Taecyeon) and Time’s Up.

Can Live Without Men, is a hip hop song produced by Park Jin Young (JYP) and features lyrics about young women who do not need a man to survive, while Ma style has a funky charm. The girls will also be working with Pixie Lott’s producer, Phill Thornalley, who composed If I Were A Boy, while Madness will feature 2PM’s Taecyeon.

Independent Women pt. III is expected for release on October 15.