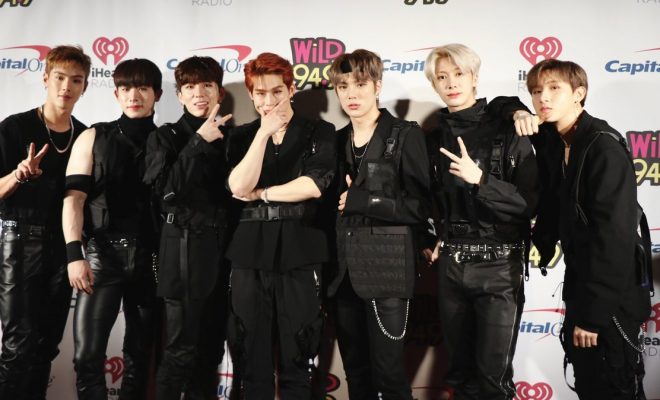 MONSTA X promised to make Jingle Ball “K-Poppin'” and the boy group did not disappoint.

MONSTA X successfully wrapped up its first performances for the Jingle Ball US Concert Tour where Shownu, Minhyuk, I.M, Hyungwon, Jooheon, Kihyun, and Wonho shared the stage with big names like Calvin Harris, Dua Lipa, Cardi B, and Camilla Cabello.

The seven-member boy group represented South Korea as the first K-Pop group to perform on the concert tour.

In Los Angeles, MONSTA X performed “Shoot Out” to kick off its set. Addressing the crowd, I.M remarked, “I know you guys can feel a little awkward about K-Pop.” Despite the language barrier, the members were met with loud cheers as they promised to make the night “K-Popping”.

The boys then showed stages of “DRAMARAMA” and “Be Quiet”.

After the show, leader Shownu shared his thoughts on the tour. “We are very glad to have finished our first set of the tour,” he said, adding that their fans helped them feel less nervous.

A Fabulous Interview with KIIS FM

The host also gave them a present to celebrate the occasion. When they unwrapped it, they were surprised with the elegantly designed bottle of kitchen cleaner. Thankfully, the host explained what it was before Wonho took a sip.

I.M told KIIS FM that 2019 is set to be a big year for MONSTA X. He revealed that they have some events coming up internationally and back home in South Korea. Watch the interview below.

Hellokpop, as an independent Korean entertainment news website (without influence from any agency or corporation), we need your support! If you have enjoyed our work, consider to support us with a one-time or recurring donation from as low as US$5 to keep our site going! Donate securely below via Stripe, Paypal, Apple Pay or Google Wallet.
FacebookTwitter
SubscribeGoogleWhatsappPinterestDiggRedditStumbleuponVkWeiboPocketTumblrMailMeneameOdnoklassniki
Related ItemshyungwonI.MJingle Ball 2018jooheonkihyunMinhyukmonsta xshownuwonho
← Previous Story Apink To Kick Off 2019 With Two Days Of “Pink Collection: Red & White” Concert
Next Story → Day6 Engraves Themselves In Fans’ Memory With Teaser Photos & Track List For ‘Remember Us: Youth Part 2’