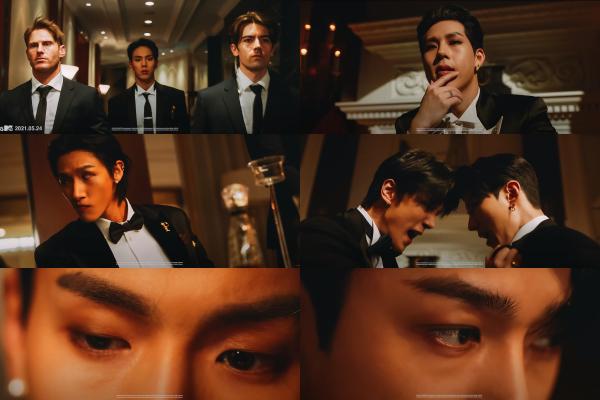 By Bea Ibañez | May 31, 2021
FacebookTwitter
SubscribeGoogleWhatsappPinterestDiggRedditStumbleuponVkWeiboPocketTumblrMailMeneameOdnoklassniki

Behold! MONSTA X presents another visual attack that swept all MONBEBE off their feet!

If there is a proper way to describe what being superior and grand is, well, MONSTA X will effortlessly do a TED talk. The first music video teaser for “GAMBLER” took MONBEBE’s breaths away, while this teaser #2 took everyone off their seats.

MONSTA X, as an all-rounder group, never disappointed as each member displayed their effortless magnificence and class. Starting off with them one by one walking on a hallway with a mysterious invitation on hand, it was visible how unique and diverse the members are from each other yet still presenting a perfect act.

Specifically, Shownu walks side-by-side with two bodyguards, hinting that he has a huge role to play. Minhyuk then made quite an entrance as the resident shepherd stylishly marches towards the door.

Kihyun, well, he never disappoints! The main vocalist looked too beguiling, especially with his slick hairstyle. The next shot got everyone wondering what I.M cannot do as he smoothly gets on his way to each MONBEBE’s hearts.

And who else would think twice gambling their all to Hyungwon as he shows off his sheer magnificence even if it was just a snap too fast. Lastly, Joohoney walks swiftly as if he is on his own red carpet.

Then, after the main rapper chicly pulled open the door, came a scene of the charismatic leader sitting in front of a man in a white suit.

And as if it was never enough to make MONBEBE stand on their feet in awe, fast-paced transitions displayed the members surrounding the luxurious table where Shownu is. Particularly, the members looked rather serious, especially I.M’s bewitching facial expression.

Nearing the end of the stunning clip, close-up shots of Shownu, Hyungwon, and Minhyuk’s glimmering yet fierce-looking eyes were shown. The three seemed to exchange glances as if they were cueing each other on what to do next. Finally, a flipped coin appeared behind the title track’s headline, sparking huge interest with the full music video reveal.

Meanwhile, MONSTA X will return to the spotlight for yet another masterpiece that will strengthen its title as a powerhouse group. Following the reveal of the second music video teaser, an album preview will be unveiled on May 31. Furthermore, MONSTA X’s 9th mini-album One Of A Kind will be released on various music sites on June 1 at 6 PM KST. Alongside is the reveal of the music video for the title track “GAMBLER.”

FacebookTwitter
SubscribeGoogleWhatsappPinterestDiggRedditStumbleuponVkWeiboPocketTumblrMailMeneameOdnoklassniki
Related ItemsGAMBLERhyungwonI.MJoohoneykihyunMinhyukmonsta xMONSTA X GamblerMONSTA X One Of A KindOne Of A Kindshownu몬스타엑스
← Previous Story “ONE LOVE ASIA FESTIVAL 2021” To Be Cancelled Due To Pandemic Uncertainties
Next Story → Globe Kmmunity To Bring Fan Favorite Korean Films Through UPSTREAM, GMovies