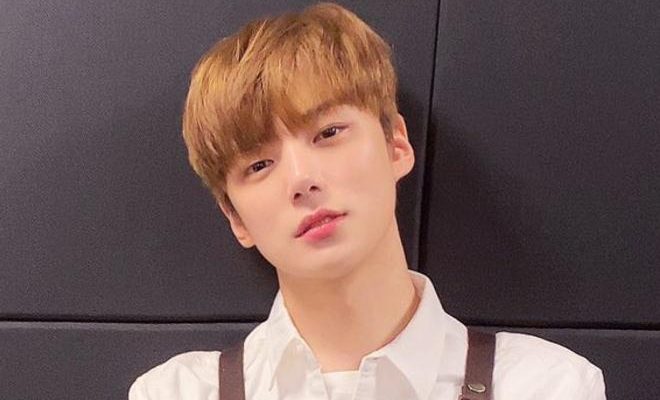 One year down, more years to go! Cheers to MONBEBE’s sunshine Minhyuk as he celebrates his first year as host of Naver NOW’s Vogue Ship Show!

Time really flies so fast as Naver NOW’s Vogue Ship Show already comes to its first anniversary. Hosted by MONSTA X’s Minhyuk, Vogue Ship Show first aired on July 30, 2020. Through the Naver NOW radio show, Minhyuk has shown his hosting skills that are second to none.

For a year, Minhyuk has turned every listener’s night into a lovely one. His aptitude for hosting and painting perhaps was a perfect fit for the show’s concept. As Minhyuk is known for being a smooth talker and artistic idol, it’s no exaggeration that Vogue Ship Show was made for him.

Vogue Ship Show became a platform for the talented idol to sympathize with fans’ stories and give them advice in a friendly way. His genuine personality continuously touched the hearts of fans around the world, making them adore him even more.

Known for having a charismatic aura on stage, Minhyuk was indeed a soft puppy that brightens everyone’s night. His precious chemistry between his weekly guests naturally added fun to the program. In particular, he received the nickname as an “all-rounder MC” who resonates warmth and intelligence all throughout. Minhyuk also showed off his unique affinity so the senior and junior guests can feel comfortable and well-integrated into the program.

Minhyuk as an all-rounder MC

MONSTA X’s official sunshine had proved his true worth as an MC with both sincerity and smooth delivery. Specifically, Minhyuk has boasted his prominence in the entertainment industry as a host for SBS’ Inkigayo and Seezn’s Back to the Idol.

And it’s visible that not only the fans and viewers enjoy Minhyuk’s presence, as the idol himself admits to having pleasant memories doing his schedules. Through his agency Starship Entertainment, Minhyuk extended his emotions as he talked about his experience as the host of Vogue Ship Show for a year.

“As I look back at this point in time, celebrating my first anniversary as the host of VogueShip Show, I think I only have happy memories. And this experience was possible because there were fans who were always with me. Not only that, but it is also thanks to all the production staff who always worked hard to deliver good episodes. Thank you for giving me the opportunity to grow as a host and a person. I’ll work even harder in the future.” – MONSTA X Minhyuk

Meanwhile, Minhyuk will actively communicate through various MONSTA X content through Mon Channel. Furthermore, fans can see Minhyuk show off his wit and fun side in several programs such as season 2 of Seezn’s Back to the Idol with Super Junior’s Eunhyuk and as a fixed cast member for Our Neighborhood Class.

He will also give laughter to fans alongside MONSTA X member Hyungwon through Gmarket Global’s INSSA OPPA.