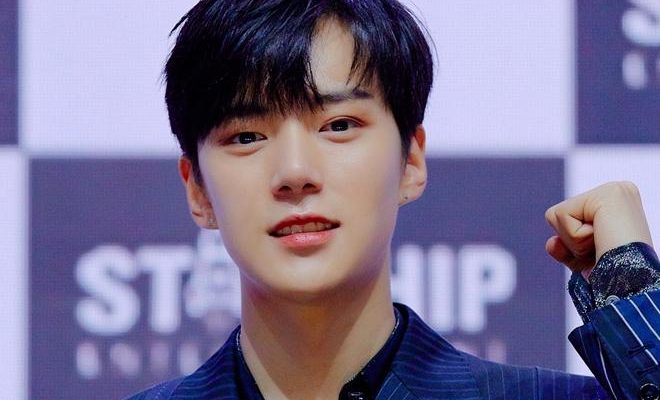 Minhyuk is the epitome of a supportive senior and we all can see it in how he treats CRAVITY with endless love and support!

MONSTA X’s Minhyuk really is one supportive senior as he continuously shows his love for CRAVITY.

Minhyuk has boasted his wit and incredible sense as the host for CRAVITY’s media showcase for the first full album THE AWAKENING: Written In The Stars. Despite this being his first time hosting a media showcase, MONSTA X’s resident sunshine was a wonderfully fun and friendly host.

Relieving the tension from the nine young members of CRAVITY, Minhyuk actively showed his love and support for his juniors. Specifically, Minhyuk took care of the members as if they were his younger brothers. His affectionate words also extended to asking the reporters to write nice and entertaining articles for CRAVITY.

After perfectly hosting the media showcase, Minhyuk expressed his sentiments through MONSTA X’s official Twitter account. The adorable Vogue Ship Show host admitted he was really nervous about causing errors and inconvenience. Taking note that it was his first time hosting a media showcase, Minhyuk did great and he finished the event well.

Not only did Minhyuk joyfully host CRAVITY’s media showcase, but he also made time to participate in the group’s TikTok challenge for their recent title track, “Gas Pedal.”

In particular, he contributed his creativity, offering ideas on how they could beautifully execute the TikTok challenge. Minhyuk suggested camera positions as well choreography, showing off a warm atmosphere together with his beloved juniors.

Meanwhile, Minhyuk has grown up to be an all-rounder. The artist excels in both performing as an idol and hosting his own programs. He continues various activities with lots of love calls from the broadcasting industry. This includes being the host of his own Naver NOW radio program, Vogue Ship Show.

Also, he joined forces with Super Junior’s main dancer Eunhyuk for the web entertainment live show Back to the Idol, which is now on its second season. Minhyuk is also the new youngest member in Our Neighborhood Class. Moreover, Minhyuk is presenting comical content through Gmarket Global’s INSSA OPPA alongside bestfriend and co-MONSTA X member Hyungwon.