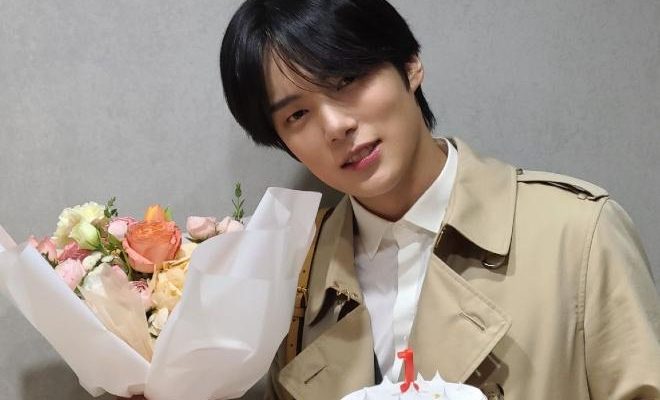 Minhyuk is inviting every MONBEBE to an online birthday party at tonight’s Midnight Idol!

After concluding his own radio program Vogue Ship Show on October 27, Minhyuk will once again return to Naver NOW as a guest on Midnight Idol, which is hosted by fellow MONSTA X members Kihyun and I.M.

Minhyuk is expected to relieve the regrets of MONBEBE who misses him having fun while painting and sharing a cheerful chat with guests through Vogue Ship Show. Thankfully, the Have A Good Night singer will comfort MONBEBE’s nights on November 3 at Midnight Idol as a celebration of his birthday.

In particular, Minhyuk announced during the final broadcast of Vogue Ship Show that he will have a birthday party on Midnight Idol. Alongside the photo of the invitation is his bright appearance with a bouquet and cake to commemorate the last episode of his radio program.

Like an invitation to a spectacular event, Minhyuk hopes every MONBEBE will join him as he enjoys a happy time with Kihyun and I.M. Midnight Idol will air tonight, November 3, at 10:00 PM KST.

Minhyuk wrapped up Vogue Ship Show with its final broadcast on October 27. He has been with the Naver NOW radio program for over a year and three months.

Hosting Vogue Ship Show was a dream come true for MONBEBE’s sunshine. It was known that he had always dreamed to be a permanent host of his own show, and Naver NOW definitely treated him like their precious son.

Noteworthy, several hashtags related to Minhyuk have been ranked at impressive places in the real-time global trends on Twitter to commemorate the final episode.

Meanwhile, Minhyuk is currently preparing for a Korean comeback with MONSTA X. The new mini-album NO LIMIT is scheduled to be released on November 19. Not only this but MONSTA X will also release its second US full album THE DREAMING on December 10.

Furthermore, MONSTA X will also fly to the US for the Jingle Ball Tour. The powerhouse group will also meet global fans on the big screen through the documentary film MONSTA X: THE DREAMING which will be released in about 70 countries all around the world on December 9 and December 11.