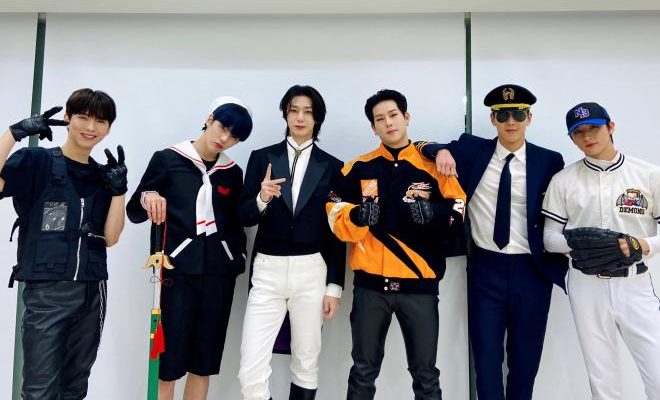 MONSTA X revealed a super fun surprise for MONBEBE with the release of this captivating clip!

MONSTA X released a choreography video that was more special than ever thanks to their eye-catching costumes in the latest version. Earlier, the group had given a glimpse of the process of selecting their attires through “Mon Channel”. All of the costumes were recommended by fans in advance.

Shownu gave flight to hearts looking absolutely smoldering like a pilot, Minhyuk worked his magic as he chose to don the style of Syaoran Li, a character from Cardcaptor Sakura. Kihyun looked edgy as he rocked a bold tech style, Hyungwon decided to channel his regal charms as an equestrian. Jooheon accelerated anticipations as a car racer, and I.M looked like quite the trendsetter in a baseball player’s uniform.

Each of the members lit up the ambiance as they ensured that they captured the attention of every Monbebe across the globe with their energetic and entertaining performance. Adding to the cuteness factor of the clip were the gestures of each of the members that surely made viewers smile. Particularly instances such as I.M imitating the moves of a baseball player during his verse and Minhyuk with his adorable moves and props.

This version is charismatic to simply say so. This is thanks to its intriguing contrast to the innate theme of the track which is more mature as well as intense in its approach.

MONSTA X, who released their third full-length album FATAL LOVE in November, made a comeback with the title track”Love Killa”. They won two crowns for the same, thereby solidifying their position as global artists.

“Love Killa” is a song that captures both the power and the unique style of the group. MONSTA X have been praised for their artistic capabilities that they showcase through their wide musical spectrum. The album also received enthusiastic responses from fans around the world, topping Hanteo’s global monthly chart in November.

MONSTA X will wrap up 2020 with various activities at the end of the year. Meanwhile, member Joohoney will be revealing a spectacular OST track for the JTBC drama Run On.