Monbebe prepare for unlimited fun as MONSTA X’s Shownu and Jooheon are on their way to ensure a laugh festival!

MONSTA X adorable leader Shownu and the ever charismatic Jooheon are set to delight fans with their appearance on JTBC’s Knowing Bros! The duo will be appearing alonside Sunmi and Zico on an exciting and enjoyable episode that will air today.

In the previews of the episode so far, both members show off their charms and keen sense of entertainment. Shownu and Jooheon are captivating through and through. They dazzle not just fans but even the Knowing Bros MCs!

Their dynamic energy is undeniable and endearing. Jooheon set the bright tone of the episode’s ambiance. He began the show with his iconic baksu (clap) and channeled his fiery rapper swag. He also performed a humorous surprise  collaboration with Knowing Bros’ Min Kyung-hoon.

Furthermore, both Shownu and Jooheon performed together and gave a fantastic performance. Shownu and Jooheon will appear as transfer students on the show. Jooheon, who is appearing for the very first time on Knowing Bros, expressed, “I’ll make sure to liven up the atmosphere of this classroom.” When Zico asked Shownu if he prepared anything for the show, Shownu said, “I’ve prepared a couple dance with Jooheon.” 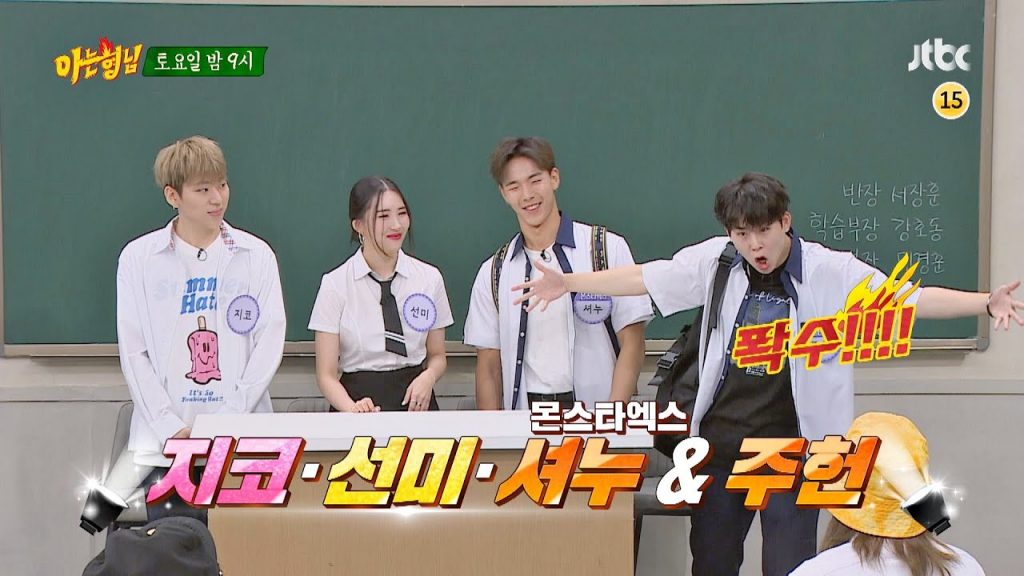 Shownu and Jooheon recently wrapped up their activities successfully with MONSTA X for their mini-album FANTASIA X. The album’s title track “FANTASIA” has been getting much loved from fans all over the world. Shownu’s versatility, ranging from vocals to dance, has mesmerized viewers not just in his on-stage performances but also on several TV programs, including My Little Television V2, Real Men 300, Law of the Jungle, Lipstick Prince Season 1,2 and Hit the Stage.

Jooheon has also created quite the power packed impact on fans with his exceptional rap performances and self-composed songs. He has evidently shown his musical prowess after his his solo mix tape DWTD placed on both, the iTunes and Billboard charts. Jooheon recently wowed Monbebe and LUVITY after having composed the track, “Jumper” for CRAVITY’s debut album as well.

Hellokpop, as an independent Korean entertainment news website (without influence from any agency or corporation), we need your support! If you have enjoyed our work, consider to support us with a one-time or recurring donation from as low as US$5 to keep our site going! Donate securely below via Stripe, Paypal, Apple Pay or Google Wallet.
FacebookTwitter
SubscribeGoogleWhatsappPinterestDiggRedditStumbleuponVkWeiboPocketTumblrMailMeneameOdnoklassniki
Related ItemsjooheonKnowing Brosmonsta xshownuSunmiZico몬스타엑스셔누아는형님주헌
← Previous Story “Record Of Youth” Shows The Vibrancy Of Young Life In Its First Teaser
Next Story → SECRET NUMBER’s Spectacular Debut With Charismatic “Who Dis?” Music Video Hits 20 Million YouTube Views