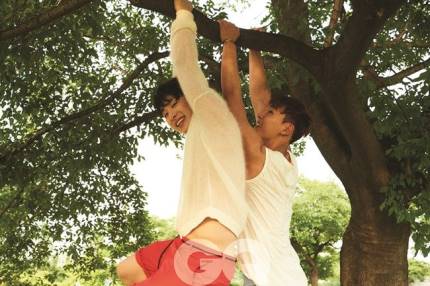 Shownu and Wonho’s photos beat the summer heat as both of them prove that they can be as carefree and refreshing despite being the oldest members of the group.

Accompanied with an interview, the boys’ passion for their dreams is as hot as the photos displayed in the spread. They match the warm, summer atmosphere as well as the natural scenery, with outfits that go along well with their vibrant charisma. 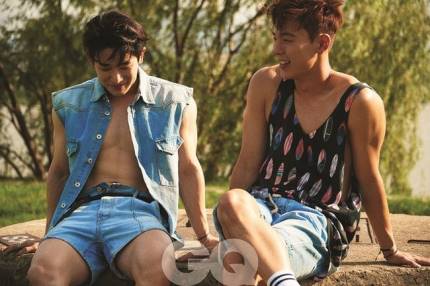 They shared some thoughts about their recent world tour and the group’s unity in the interview. When asked about their feelings looking back to the days when they debuted as a group, Wonho spoke of an experience during their performance on the Dream Concert stage just 10 days after their debut.

He mentioned that the stage was huge and there were a lot of people in the audience. Even though no one knew them, when they started dancing, the cheers of the crowd felt like electricity on his skin.

Shownu, on the other hand, talked about their concert tour abroad, listing it with the moments he would want to remember in slow motion. He said that he wants to engrave their overseas concerts in his memories, adding that shows in Europe, Latin America and United States are places that are hard to come by; he wishes that time would pass slower whenever he is there. 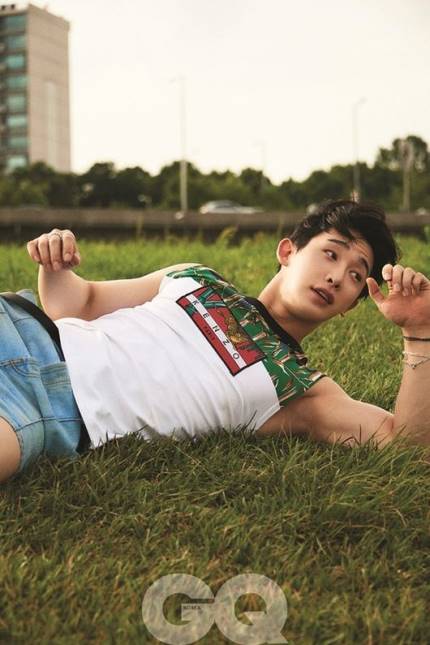 Shownu also fondly reminisced of the time when he watched a Beyoncé and Jay-Z concert with fellow members Jooheon and I.M. during their stay in Amsterdam. He felt happy to know that he brings the same joy to Monbebes, which he felt while watching their concert. 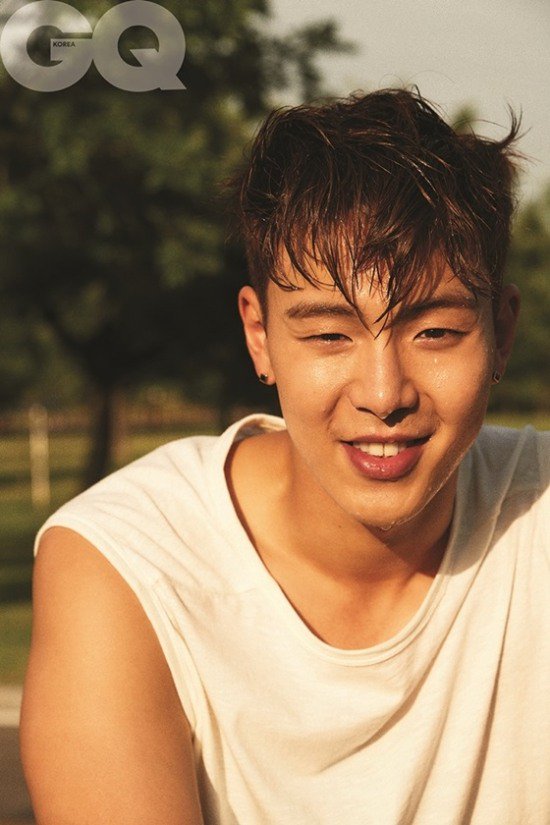 Wonho and Shownu showed how close they are talking about each other’s strengths. Wonho affectionately explained how Shownu is different compared to other people he has met, stating that the leader is tolerant and has the tendency to match himself well to others despite appearing taciturn and indifferent.

In return, Shownu praised Wonho’s focus and perseverance, mentioning his zeal in exercise and composing. To wrap up the interview, they were asked about Monsta X’s greatest strength.

Shownu answered that it was the unique Monsta X energy that exudes from their performance as Wonho added their physicality to the list.

The beautiful photos and inspiring interview is included in GQ Korea’s August issue, so make sure to get your hands on a copy once it comes out.

Here’s a throwback when Shownu tweeted a sneak peek of their GQ photo shoot in July:

Monsta X just finished the overseas shows of the 2018 MONSTA X WORLD TOUR THE CONNECT, with the last performance on August 12 at Sao Paulo, Brazil. They are now busy preparing for the encore show of their world tour, 2018 MONSTA X WORLD TOUR THE CONNECT in Seoul – Encore, which would be held on August 25 and 26 at SK Olympic Handball Stadium. This not only serves as an encore for their previous Seoul shows last May, but also stands as a major cap-off of their world tour.

Hellokpop, as an independent Korean entertainment news website (without influence from any agency or corporation), we need your support! If you have enjoyed our work, consider to support us with a one-time or recurring donation from as low as US$5 to keep our site going! Donate securely below via Stripe, Paypal, Apple Pay or Google Wallet.
FacebookTwitter
SubscribeGoogleWhatsappPinterestDiggRedditStumbleuponVkWeiboPocketTumblrMailMeneameOdnoklassniki
Related ItemsGQ KoreaGQ Korea Augustmonsta xshownuwonho
← Previous Story BTS’ Suga Is The Best Idol Producer, According To Survey
Next Story → EXO’s Baekhyun Records Impressive Jumps On Billboard Charts This Week