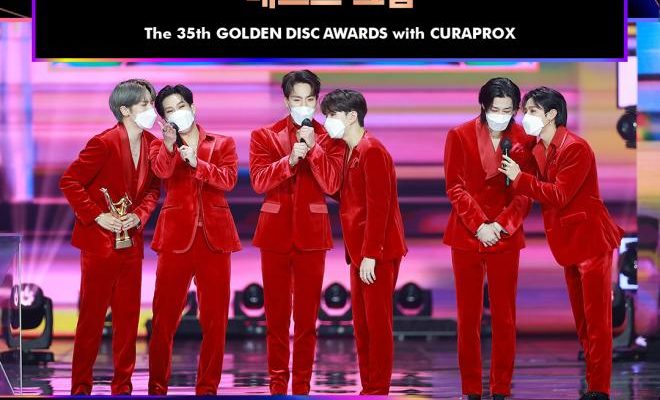 Bearing a regal presence and lighting up the stage with their grand performances, MONSTA X showcased that they are the ‘best of the best’ and their win for the “Best Group” at the Golden Disc Awards, reiterated just the same!

MONSTA X is a genre indeed, and their recent win at the Golden Disc Awards proves just that. The six kings of K-Pop took home the crown for the “Best Group” at the 35th Golden Disc Awards, which was broadcasted live on January 9.

Post the win, the best leader of the “Best Group”, Shownu said, “I am grateful to the fans who support MONSTA X and the hard-working members. As we received such a big award, we will try our best to become a group worthy of the name”.

Sharing his sweet sentiments, member Joohoney said, “I remember performing in front of the fans and saying how I felt. I think this award is something that MONBEBE should receive for making us the best group”. I.M. thanked their beloved fans all over the globe as well.

Besides this, MONSTA X dominated the stage with one dynamic performance after another, especially with a captivating stage for Hyungwon’s self-composed song “Nobody Else“. Particularly, the unique water show during “Nobody Else” was eye-catching to state the least. The boy group had also previously shown an exceptional performance with a water stage at the 33rd Golden Disc Awards in 2019.

The rich repertoire, which led to the performances of the title track “Love Killa” from the third full-length album FATAL LOVE and “MIDDLE OF THE NIGHT” from their much-loved album ALL ABOUT LUV, beautifully spotlighted the innate charms of the members. Moreover, MONSTA X looked like a vision to behold in their royal red suits.

MONSTA X recently concluded their promotional activities for FATAL LOVE. The group has been impressing with their stellar wins, especially with their first daesang that they won after their debut for the “Stage of the Year” at the 2020 Asia Artist Awards.

Meanwhile, MONSTA X a.k.a the stage masters will be impressing with their various global activities this year as well.