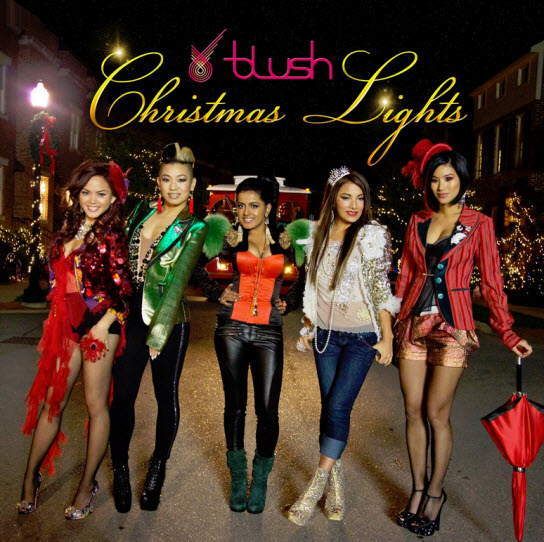 Shot on location around Nashville, Tennessee, the feel-good holiday video for Christmas Lights was created and directed by the famed Trey Fanjoy who has directed over 150 major label music videos, including previous credits for Taylor Swift’s Love Story, Miranda Lambert’s Over You, and Keith Urban’s Long Hot Summer.  Trey Fanjoy has received numerous awards and accolades for her work including over 15 CMT award nominations and seven wins including  Director of the Year and Video of the Year.

BLUSH representing 5 girls from 5 countries, has already gained an international following with their powerful vocals, exotic flair and standout performance skills. They are becoming known for “Bringing the Power back to Girl Power.” The girls of BLUSH have travelled throughout the world to perform on tours with other accomplished musicians and artists, and have also appeared in numerous US tours and concerts with acts such as B.o.B., Diana Ross at LA’s Nokia Theatre, Far East Movement and most recently with The Wanted at their US Weekly post American Music Awards party. Their U.S. television debut was on the American So You Think You Can Dance stage with Snoop Dogg. BLUSH charted #1 on the Billboard Dance Chart with their hit titled “Dance On” and also charted #3 with their debut collaboration with Snoop titled “Undivided”  — standing alone as the only Asian group to ever have their first two singles hit Top 10 on a major U.S. chart. BLUSH is also the fastest of any Asian artist to hit #1 on a major U.S. chart, and is also the first to have both singles hit the Top 3.They also had the lead single “Up Up and Away” on Disney Channel’s “Shake It Up” Live 2 Dance Soundtrack.

Ji Hae only recently discovered her incredibly gifted voice and started singing after graduating from Hoseo University, where she studied law. She participated in Superstar K, Korea’s largest audition program and placed in the top 30, even though she had no formal vocal or dance training. Ji Hae finds inspiration in local Korean artists, Hwayobi and Younkwon Na, as well as international artists like Stacie Orrico and Joss Stone. She plays the flute and is learning to play the guitar.