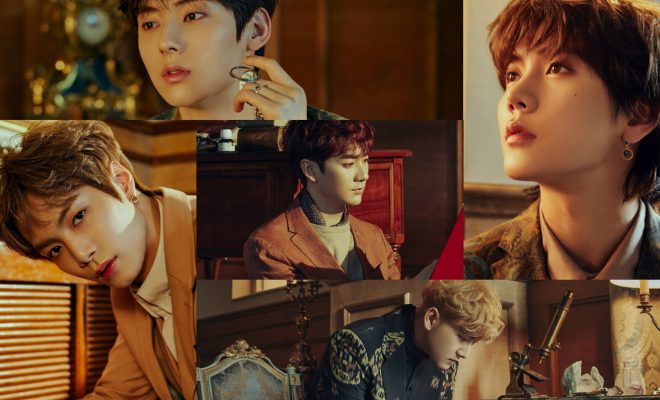 The official photos of NU’EST are finally out!

The members of NU’EST are royally charming in the first set of official photos for their first full group comeback in three years.

Dressed to the nine, JR, Aron, Baekho, Min Hyun, and Ren captivate with a unique and regal vibe, while showcasing their individuality and high-class visuals in the new photographs for Happily Ever After, uploaded on the boy group’s social media channels at midnight of April 17.

See Also: NU’EST Promises A “Happily Ever After” For LOVEs In First Full-Group Comeback In Three Years

Leader JR shed his warm smile to deliver an intense stare at the camera, looking incredibly dashing in beige suit. Aron became a definition of well-raised royalty in his suit, while reading a book and boasting a well-defined side profile.

On the other hand, Min Hyun, who kicked off NU’EST’s comeback with his solo song “Universe”, opted for a trendy style in his checkered suit. Staring longingly away from the camera, he continues to raise fans’ curiosity on how the boys will bring their concept alive in this comeback.

Ren finished off the parade of official photos with his colorful ensemble. With his sparkling eyes, the NU’EST member gave off a dreamy vibe in his photograph.

Following the end of their Segno concert, the boys of NU’EST unveiled a prologue film and teaser photo in relation to their comeback with a new album on April 29. Their upcoming return will mark their first full group comeback since Canvas.

As the date of the album release draws near, the boy group is expected to continue teasing fans with more content for Happily Ever After.