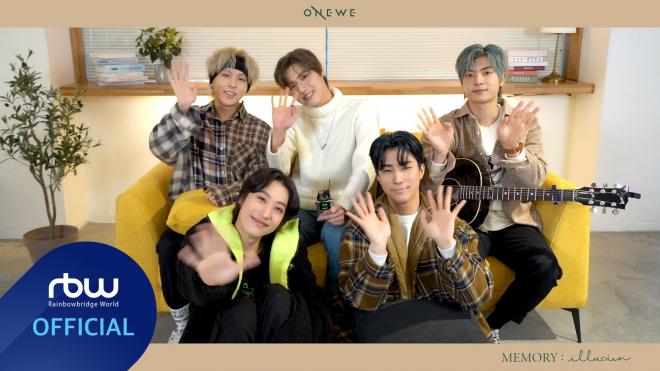 ONEWE shared details about their new songs and delivered a Highlight Medley like no other.

Boy band ONEWE unveiled the anticipated preview for the new single album MEMORY: illusion. Unlike most videos that are mainly comprised of song snippets, this one included something a bit different.

In the newly released clip, the band sat together to present its latest work to its fans. The boys introduced the tracks on their first single album one by one. In addition, they did a little acapella preview as well, showcasing powerful vocal ability.

Specifically, the tracks are based on the theme of “memory.” For example, “Trauma (Aquarium)” is a song inspired from member CyA’s traumatic experience of falling into deep water in the past. Then, “Eraser” sings about wanting to get rid of certain memories.

Meanwhile, member Yonghoon self-composed the title song “A Book In Memory”, for which he got the inspiration after watching a movie. It will present a dreamy atmosphere and will increase the intensity of the sound during the second half.

The songs have a strong feel that send out chills to listeners. It was enough to hear only seconds from each piece to deliver that feeling, which further increased the excitement for the full versions.

ONEWE shared two types of concept images, including group, solo and unit photos. The members emitted a mature atmosphere through their first shots in stylish suits. Then, the next pictures showed the quintet in a slightly softer setting and wearing more comfortable and casual looking clothes.

Moreover, the band also presented solo teasers in the form of short clips, which focused on each member’s charm. The performers plan to finish their promotion content with a music video preview on December 10, just a day before the new single comes out.

The band will release MEMORY: illusion on December 11 at 6 PM KST. To celebrate this comeback, ONEWE plans to hold a special online concert party, ONEWE STUDIO WE: LIVE #5 [ONEWEVE, Fully blooming memories in two starlights] on December 13 at 9 PM KST.