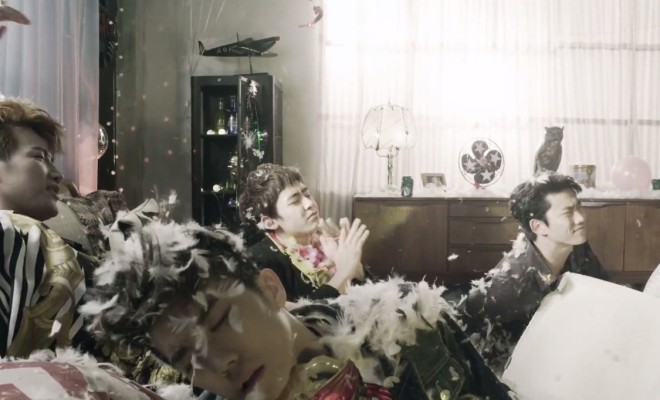 Party version of 2PM’s ‘Go Crazy’ gets even crazier

If you liked the MV version of 2PM’s Go Crazy, you probably will like the ‘Party Version’ of it too.

A bit like the movie The Hangover, the video shows the boys just waking up from their sleep after a night of party. With feathers from pillows and a goat wearing a crown, you know that they did really got wild the night before!

Hellokpop, as an independent Korean entertainment news website (without influence from any agency or corporation), we need your support! If you have enjoyed our work, consider to support us with a one-time or recurring donation from as low as US$5 to keep our site going! Donate securely below via Stripe, Paypal, Apple Pay or Google Wallet.
68
SHARES
FacebookTwitter
SubscribeGoogleWhatsappPinterestDiggRedditStumbleuponVkWeiboPocketTumblrMailMeneameOdnoklassniki
Related Items2pmgo crazy
← Previous Story Mysterious photos of Juniel and Honggi posted on FNC’s Instagram
Next Story → WINNER’s impressive acoustic cover of 2NE1’s ‘Missing You’