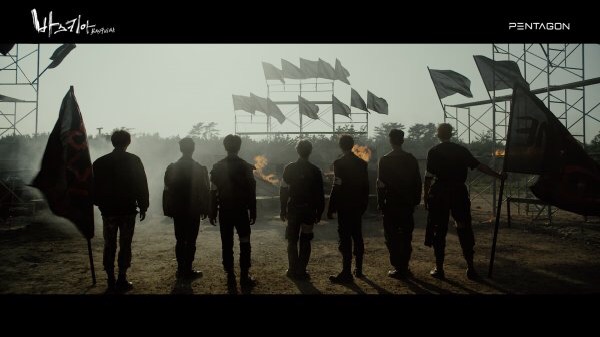 PENTAGON is all set to unveil a blazing new video for their lit track!

PENTAGON announced the release of a special video for their track “Basquiat”. The track was a part of the group’s Mnet’s Road To Kingdom finale performance. The group unveiled a concept image as well as a short clip of the new song “Basquiat,” on their official SNS.

The post showcased the members exuding strong bearing with their backs to the camera. In the clip, the group is walking towards a battleground with black flags billowing in the background.

This imagery gave the clip quite the edgy aesthetic. A caption that read as, “#PENTAGON “Basquiat” Coming Soon,” accompanied the clip as well.

The group performed “Basquiat,” at the final contest of Mnet’s Road To Kingdom on June 18. The track is inspired by artist Jean-Michel Basquiat. He expressed his fight against slavery, inequality, freedom, homophobia, and racism through his art.

Basquiat’s work is often dubbed as “visual poetry”. It is in direct criticism on colonialism while supporting social class discrimination.

PENTAGON’s “Basquiat,” also expresses these ideas through its powerful lyricism. The track’s dynamic vibe is also thanks to its power packed composition. The song falls in the electro rock genre with the fusion of subtle dance beats.

Additionally, members Hui and Woosuk participated in writing and composing the track.

Besides this, the group has previously revealed a “Basquiat Intro VCR,” video as well. The video announced the upcoming release of this single. The intro VCR video is the same as the one played at the start of their performance on Road To Kingdom.

While the exact date for the release of their single “Basquiat,” remains under wraps, it has surely raised fans’ anticipations around the release with its awe inspiring glimpses so far.