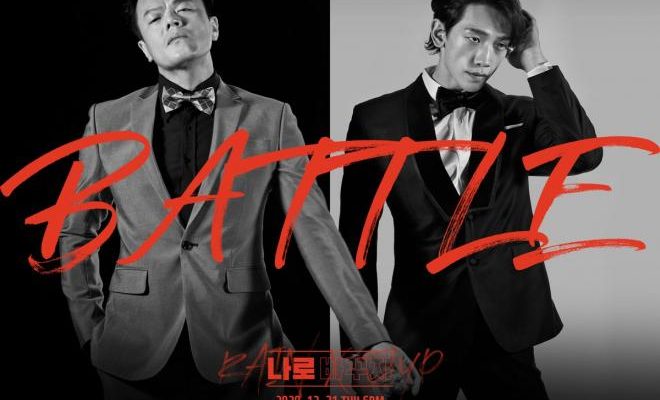 Rain And J.Y.P Tease An Upcoming Battle For Their New Collaboration Duet Titled “Switch To Me”

Rain joins forces with prior mentor J.Y.P, unveiling the first teaser image hinting at a battle during their collaboration duet called “Switch To Me”!

Rain and J.Y.P raised anticipation for their approaching collaboration track titled “Switch To Me”, by releasing the first image teaser for the song.  Pictured in black and white, wearing formal suits, the artists pique viewers’ curiosity with their serious gazes. The red word “BATTLE” emblazoned across the image, provides a glimpse into the concept for the track.

“Switch To Me”, written and composed by J.Y.P himself, is a song of the New Jack Swing music genre. This dance genre of the 90s incorporates analog sounds to a strong 8-bit rhythm.

The artists’ collaboration will show a battle over a woman, and the confrontation between Rain and J.Y.P to win her affections will surely thrill viewers.

Rain and J.Y.P intrigue with their first theatrical teaser image. In particular, the photo draws attention to the two men’s different charisma through their poses and styling. Their different presences and appeal will be the focal points of their fierce quarrel, as they fight for love.

Furthermore, fans can expect a polished and engaging track. With both known for their immense stage presences and performing perfection, many are expecting industry legends Rain and J.Y.P to deliver a collaboration to remember.

Meanwhile, “Switch To Me” releases on December 31 at 6 PM KST, across various streaming sites.