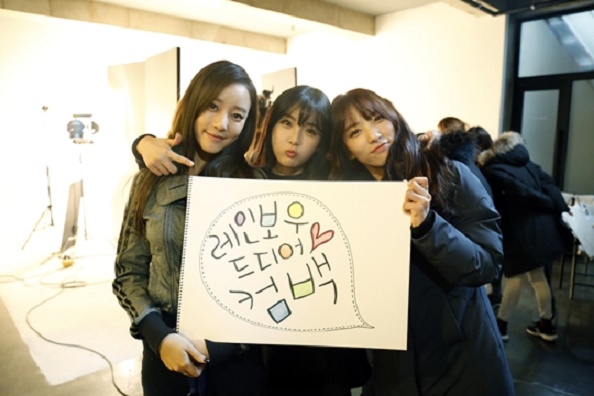 Rainbow to Return in February

Girl group Rainbow will be making its long-awaited comeback this February, after a year and seven months!

DSP Media announced the news of the group’s sudden comeback through a behind the scenes photo from the set of the girls’ album photo shoot. In the photo, Rainbow’s Woori, Ji Sook, and Hyun Young show off their bright smiles while holding a sketchbook that says ‘Rainbow. A comeback finally’ in their handwriting.

The year 2014 witnessed the release of subunit Rainbow Blaxx’ special mini album Rainbow Blaxx with the hit title song Cha Cha, as well as the group members’ hectic individual activities as MCs, actresses and reporters. Thus, this imminent comeback as a whole group has raised much expectation from fans.

We need your support! If you have enjoyed our work, consider to support us with a one-time or recurring donation from as low as US$5 to keep our site going! Donate securely below via Stripe, Paypal, Apple Pay or Google Wallet.
22
SHARES
FacebookTwitter
SubscribeGoogleWhatsappPinterestDiggRedditStumbleuponVkWeiboPocketTumblrMailMeneameOdnoklassniki
Related ItemsCha ChaDSP MediaHyun YoungJi SookRainbowRainbow BlaxxWoori
← Previous Story 4Men and Vibe to hold Valentine’s Day concerts in the US
Next Story → Davichi’s Min Kyung’s New Song: Based On A True Love Story