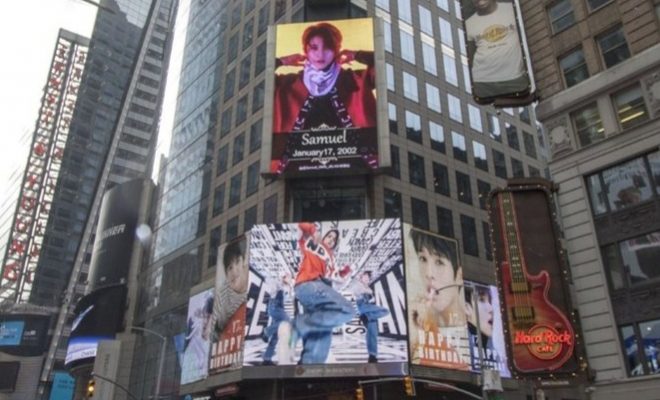 South Korean singer Samuel celebrated his 16th birthday (international) on January 17. As a birthday gift to the idol singer, his fans had birthday advertisements put up on Times Square in New York City.

The birthday ads occupied a total of 11 screens in the bustling major commercial intersection and entertainment center on January 17. According to reports, a Chinese fan page of Samuel shouldered the cost of the ads.

The idol singer expressed his gratitude to fans for a meaningful and memorable gift. He then promised to work harder from now on.

Samuel became the youngest K-Pop singer to appear on the screens in Times Square. 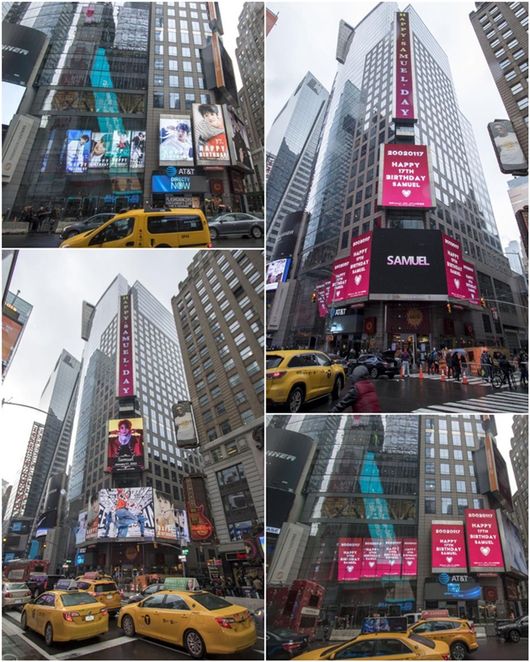 Aside from the Times Square birthday ads, fans all over the world set up advertisements in their respective country, and also donated to special causes in the name of Samuel.

The 16-year-old singer also had a birthday photo shoot to commemorate his special day. Brave Entertainment uploaded a behind-the-scene video of the shoot on Samuel’s official YouTube channel.

Samuel officially began his singing career in 2015 as the other half of 1Punch alongside now-YG Entertainment rapper One. The duo debuted with the album The Anthem and title track “Turn Me Back.”

However, 1Punch disbanded eight months after its debut, prompting Samuel to promote as solo artist PUNCH. In 2016, he released a collaboration with American rapper Silentó in the song “Spotlight.” His collaboration with the rapper won him the 26th Seoul Music Award for Global Collaboration.

In 2017, Samuel joined Mnet’s survival show Produce 101 as Brave Entertainment’s representative. Despite ranking high on the first elimination, the idol singer failed to make it as a member of Wanna One, much to the disappointment of many fans.

That year, Samuel released his debut album Samuel The First Album [Sixteen], with “Sixteen” as its title track. He then followed up his debut EP with Eye Candy.

A day before his 16th birthday, Samuel surprised fans with the release of his new single “Winter Night.” The idol singer is set to make his Japanese debut next month.