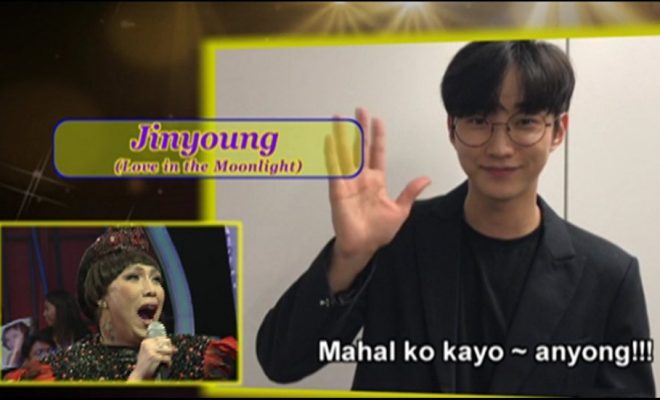 Who also wants Jinyoung and Dara to greet you a “Happy Birthday”?

Dara wished her good friend and fellow ‘Pinoy Boyband Superstar’ judge a happy birthday and sang her the Korean birthday song. The former 2NE1 member added that she was unsure what to give Vice as a gift. “I don’t know what to give you because you already have everything,” she said.

The K-pop star then surprised her friend with a birthday greeting from B1A4‘s leader Jinyoung. A self-confessed ‘Love in the Moonlight’ fan, Vice exclaimed “Oh my god,” at the mention of the idol’s name.

“Hello, Vice Ganda! I’m Jinyoung,” began his birthday greeting. The idol extended his gratitude for the love and support. “Happy Birthday to you,” he said, adding that he hoped to be invited on the comedian’s show in the future. Jinyoung also said “Hi” to the viewers and ended his greeting with a “Mahal ko kayo [I love you].”

Throughout the video greeting, Vice continued to exclaim “Oh my god”, obviously lost for words at the surprise. Aside from the birthday greeting, the comedian also received a bracelet from the drama’s cast.

‘Love in the Moonlight’ began airing on the local TV network last March 6. Since then, the Filipino comedian has expressed her love for the show and its actors on Twitter.

Jinyoung’s surprise appearance on ‘Gandang Gabi Vice’ made him one of the hottest topics on the Philippine trends of Twitter.

‘Love in the Moonlight’ airs every night from Mondays to Fridays on local network, ABS-CBN. The drama enjoys strong viewership ratings against its competitors since its first broadcast. Aside from this, it constantly trends among local topics on Twitter.

Hellokpop, as an independent Korean entertainment news website (without influence from any agency or corporation), we need your support! If you have enjoyed our work, consider to support us with a one-time or recurring donation from as low as US$5 to keep our site going! Donate securely below via Stripe, Paypal, Apple Pay or Google Wallet.
768
SHARES
FacebookTwitter
SubscribeGoogleWhatsappPinterestDiggRedditStumbleuponVkWeiboPocketTumblrMailMeneameOdnoklassniki
Related ItemsB1A4Jinyounglove in the moonlightSandara ParkVice Ganda
← Previous Story CNBLUE’s Jung Shin Plays Not Only Bass But Also Cameras + Self-Taken Photos At Group’s Jacket Shooting
Next Story → Girl’s Day To Boast Team Chemistry With Fifth Album: “There is no such thing as a seven-year curse for us”