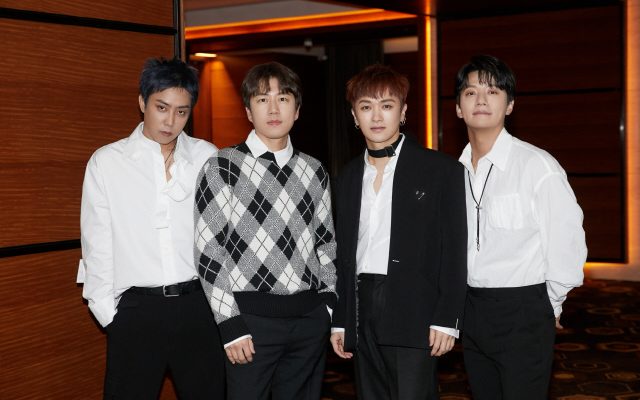 The group, currently promoting as four members, met with the media people hours ahead of their comeback album release.

SECHSKIES held a press conference in Hotel Conrad in Seoul at 11AM on January 28 to talk about their very first mini album ALL FOR YOU. Eun Jiwon, Lee Jaejin, Kim Jaeduck and Jang Suwon all looked spiffy as they sat down to discuss their latest endeavor. 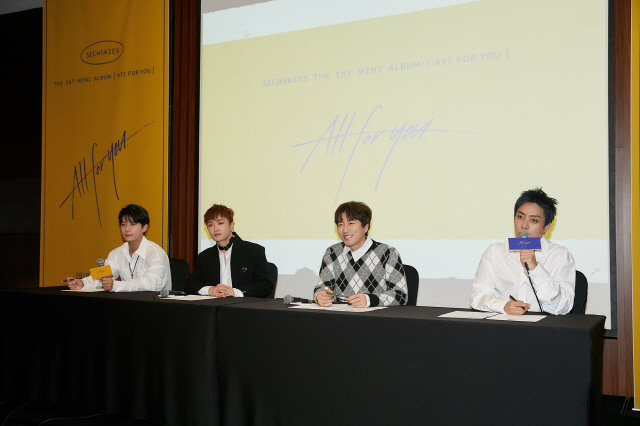 The comeback, which is happening two years and four months after the release of THE 20TH ANNIVERSARY album, marks SECHSKIES return as a four-member group. The first-generation idol group debuted in 1997 with six members and disbanded in 2000. They reunited in 2016 through the program Infinite Challenge and signed on with YG Entertainment as a five-man group.

Ko Jiyong found it difficult to join SECHSKIES activities as he has established a life away from the music industry. However, he kept his promise and shared with fans a glimpse of his domestic life as he became a cast member of The Return of Superman (2017-2019) with his son.

Unfortunately, main vocal Kang Sunghoon has to terminate his contract and leave the agency in 2019 due to legal battles (charges have since been dropped). Leader Eun Jiwon said, “I apologize to fans who have been waiting for us for so long to make a group comeback, only to return as four. It was best when there were six people, including Ko Jiyong. SECHSKIES started as six and became four, but it is still us, SECHSKIES as it is a valuable team name for us.” 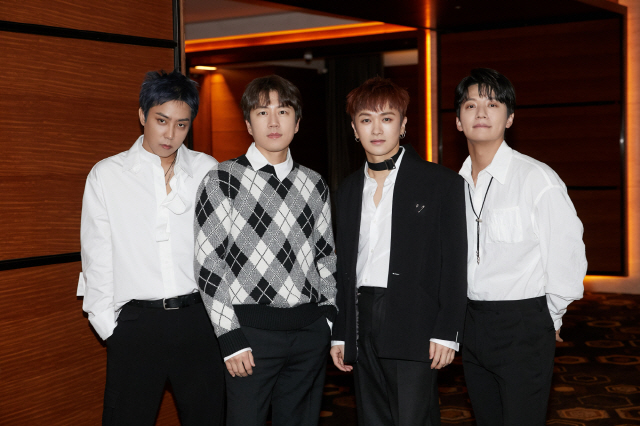 “We talked a lot more and shared deeply. We did a lot of things and put so much effort to avoid feeling the empty space. There is no fix main vocal but we made sure to fill the album with vocals that matched the songs,” the charismatic leader added.

Eun Jiwon was candid in saying that he felt responsible as the leader. He added that the songs “are not compositions biased to anyone.” He also proudly shared how each member has evolved and readied themselves for the comeback.

“I had to be prepared for a long time with the burden and responsibility because someone has to take care of the music. Since I am the leader and I know the characteristics of the members well. I did the directing when we were recording. This time the members worked hard enough so nothing can be said.” 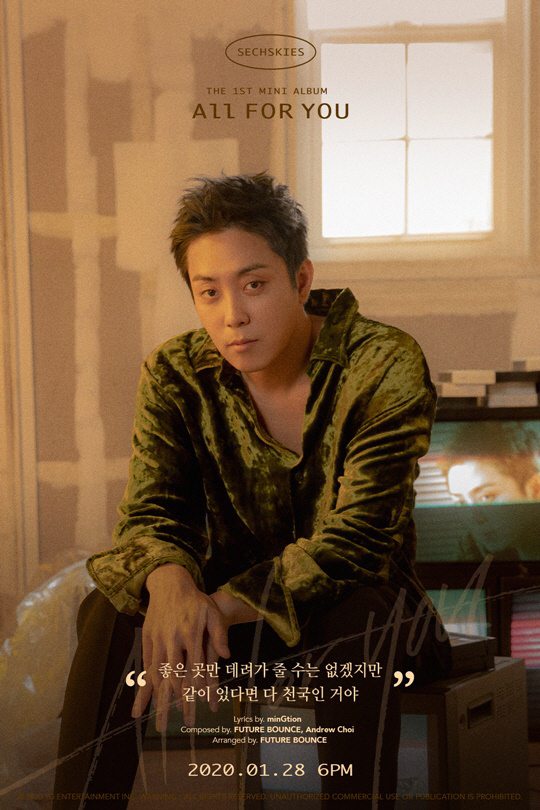 Jiwon continued, “Suwon has grown, Jaeduck has also improved his condition and Jaejin’s vocals have improved dramatically. There was a need to change positions for this comeback. Jaeijin has to be a vocal instead of being a rapper and a dancer. I practiced a lot so that I could fill in for each position. Once again I am grateful to the members for giving so much effort. I have this great wish (for the album) to be loved by the public.”

Jang Suwon said “Whether there is six people or four, the members are always strong. We are a lot closer now, still being playful and like to bicker but definitely much closer. Even if we struggle, our chemistry, bond and care for each other are our team’s strengths.” 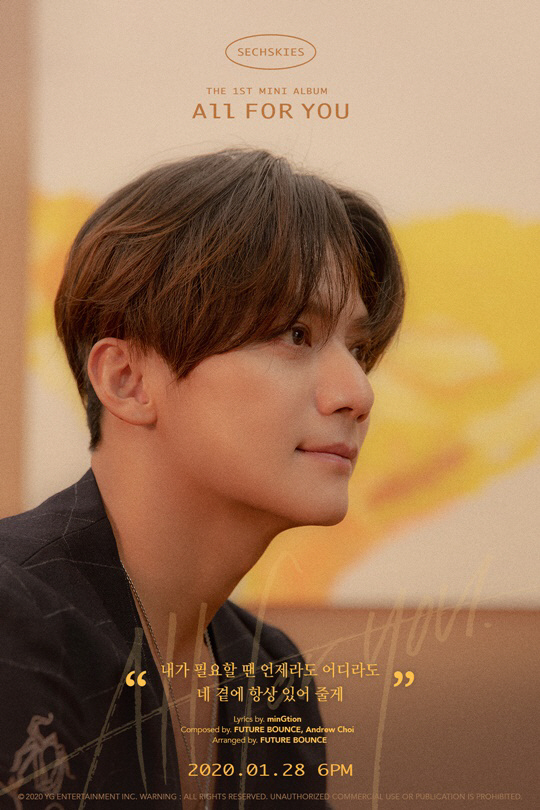 The group’s maknae also stated that he thought a lot about improving his skills. “As I got older I wanted to make up for my vocal cords getting older and getting worse. I have practiced basic things like breathing and speech.”

Kim Jaeduck also revealed the things he did to get ready for their comeback. “I practiced with a lot of songs. The style has changed a lot these days. So I trained a lot so as not to be left behind.” As for Lee Jaejin, he said, “I have been taking private lessons all the time to help the team.” 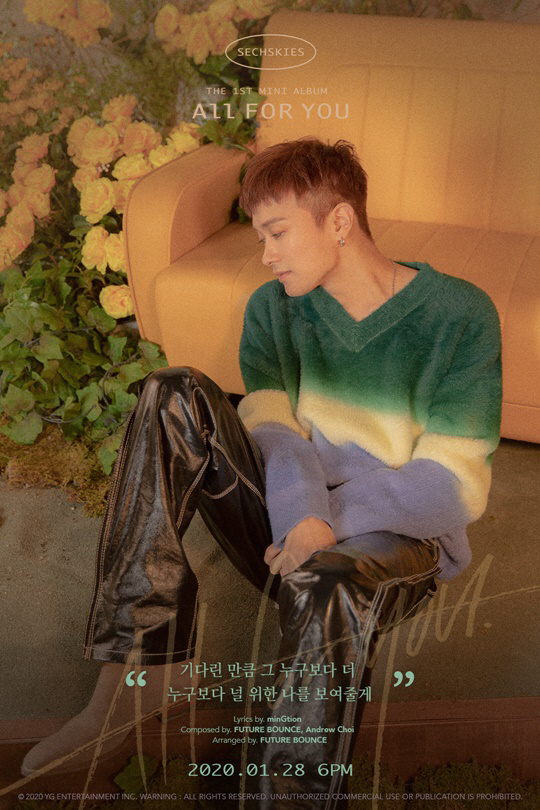 First Mini Album ALL FOR YOU

As a first-generation idol group, SECHSKIES has been more passionate about working on albums since their reunion.  For their latest release, each member showcased their competencies and personalities. The album’s title track “All For You” is a 90’s R&B song that expresses emotions for loved ones.

Eun Jiwon stated, “In the 90’s, R&B was reinterpreted as songs that give warmth and melt hearts.” The music video also incorporated elements that holds meaning to the group and depict members’ ideas such as their debut date and their old voice mailbox number. “These are fun elements for fans to see. It’s like our fans and our own symbols”, the group leader added. 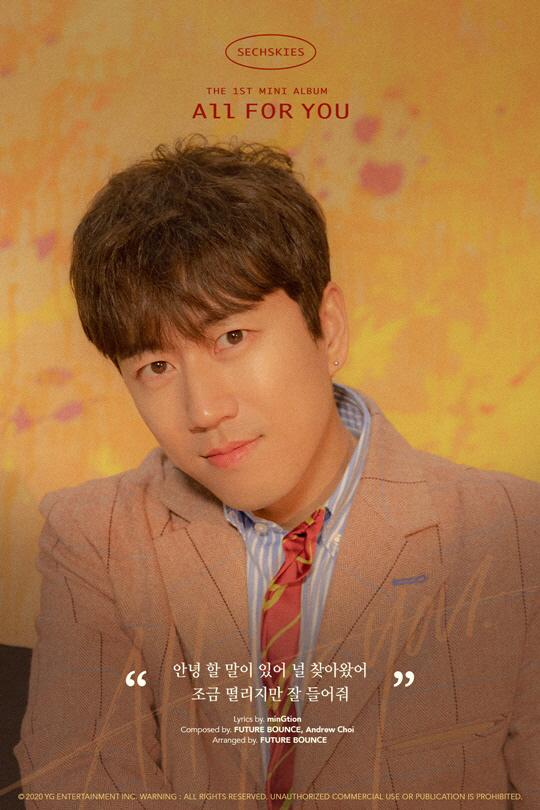 The mini album has five songs including the title track. “DREAM” has a dreamlike atmosphere while “ROUND & ROUND” has exciting up tempo beats. It also features “MEANINGLESS” and the exciting Miami-based genre song “WALKING IN THE SKY”. The members all expressed their willingness to do music as long as they can and with support from fans.

SECHSKIES first mini album ALL FOR YOU will be out on January 28 at 6PM KST.

READ: SECHSKIES Hypes Up Comeback With Release of Concept Posters