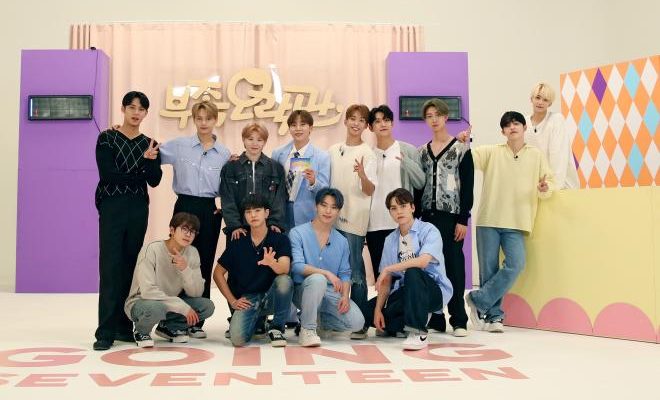 SEVENTEEN is bringing out yet another intriguing and fantastic concept for their next comeback! They finally unveiled the first teaser for their upcoming album Attacca!

Powerhouse boy group SEVENTEEN is now gearing up to conquer the music scene again through their upcoming mini album Attacca.

On the evening of September 23, Pledis Entertainment announced the group’s official return through a dauntless and haunting teaser poster.

It shows Scoups, Jeonghan, Joshua, Jun, Hoshi, Wonwoo, Woozi, The8, Mingyu, DK, Seungkwan, Vernon and Dino striding on an empty pool towards a plain lot. While donning highly-fashionable and well-styled outfits, the boys really caught everyone’s attention with their commanding and manly aura even though their faces aren’t on camera. In fact, the name of the album is also striking and extraordinary, which fits SEVENTEEN’s image well. Translating to “attack” from Italian, the word means “to begin the next without pause” in terms of musical aspect.

The boys’ back profiles are so distinct from each other yet they are all attractive enough to steal everyone’s hearts and attention. This just goes to show that every member of the group are deeply charismatic and influential without even trying hard.

Exuding a fierce and fearless vibe, the teaser is in a mix of red and black hue, with extremely high contrast that adds a unique and artistic touch. Accompanying the members’ photo, the details regarding the release of the group’s offering, particularly the date, day and time, are also placed at the bottom portion.

As of current writing, the teaser poster has already amassed around 177,000 retweets and almost 254,000 likes on Twitter, proving SEVENTEEN’s immense popularity.

THE START OF AN ICONIC ERA

Fueling fans’ excitement even further, Pledis Entertainment also uploaded the official scheduler for Attacca comeback. From the looks of it alone, CARATs are in for a wonderful treat starting on September 29 at 12 am KST with the release of the concept trailer for the album. 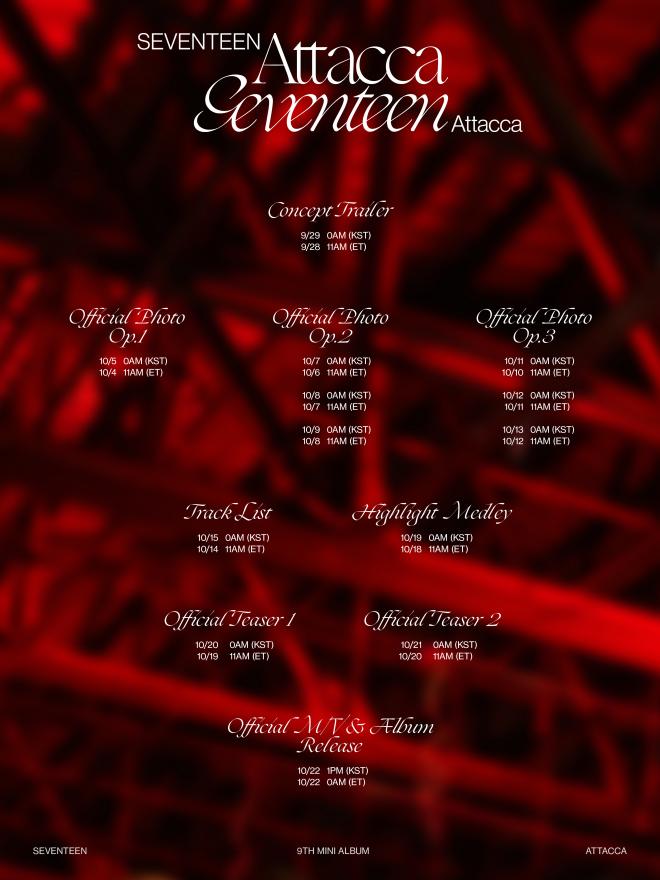 Making this comeback more remarkable, SEVENTEEN has three types of concept images, which correspond to their album versions namely OP.1, OP.2, and OP. 3. These exciting content will grace everyone’s timelines starting on October 5 to October 13.

Following these, the track list and highlight medley will both come out on October 15 to October 19 respectively. Few days prior to the music video and album release on October 22, two music video teasers will first stimulate fans’ curiosity regarding the group’s 9th mini album.

Meanwhile, SEVENTEEN will release Attacca on October 22 at 1 PM KST.