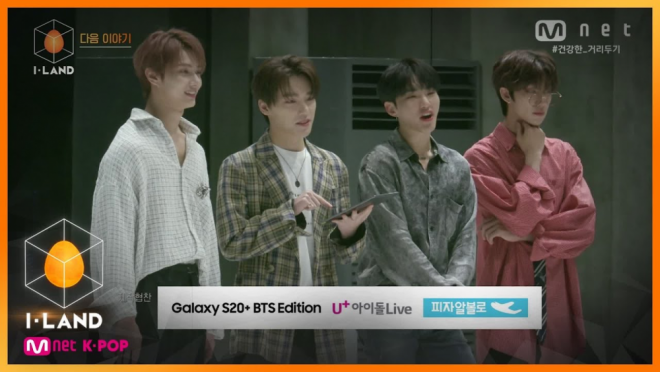 The next episode of I-LAND will definitely be an “Aju Nice” treat for fans!

In the latter part of the August 28 episode, an exciting preview was given to amplify fans’ anticipation. The teaser for next week’s episode showed SEVENTEEN’s Hoshi, Jun, The8, and Dino appearing in the show.

Unlike BTS’ previous appearance, SEVENTEEN’s upcoming episode will feature them closely mentoring the trainees. The preview also shared that the I-LANDers are set to take on a mini-mission for unit selection which involves covering two songs of SEVENTEEN with different concepts.

Looking like a cheerleader and mentor at the same time, Hoshi generously gives encouragement to the trainees. “Be shameless! Be entertaining! Let’s go!” he adorably said. He also hypes up the trainees by dancing with them.

Moreover, the sneak peek unveiled the third test. There will be two new songs that the trainees will perform. The two units will be showing different sides through the “Chamber 5 (Dream of Dreams)”, which appeals with its refreshing concept, and “Flame ON” with its explosive theme.

Meanwhile, the global viewer voting will finish today at midnight KST. The second eliminated trainee will be announced on the September 4 episode.

Watch the exciting preview for SEVENTEEN’s arrival on I-LAND below: