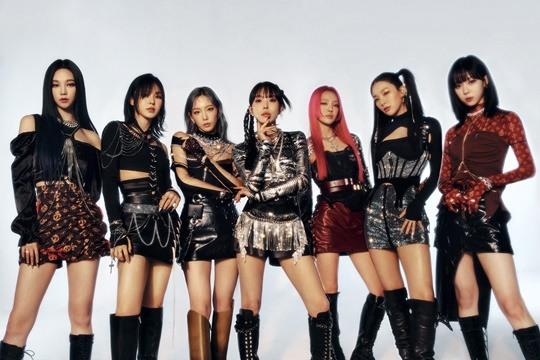 SM Entertainment unveiled its newest project, planning to launch a rotating girl group formed of its agency’s talented female artists. The project called, “Girls On Top”, will feature SM Entertainment’s female idols in different combination units that will each showcase a different concept or theme.

Its first unit, coined “GOT the beat”, will highlight intense dance tracks and stages. The unit combines members from all K-Pop generations, including BoA, Taeyeon and Hyoyeon from Girls’ Generation, Red Velvet’s Wendy and Seulgi, as well as aespa’s Karina and Winter.

At midnight on December 27, SM Entertainment raised excitement worldwide for the project’s launch. The company uploaded the first image of the “GOT the beat” unit on their official SNS channels as well as the Girls On Top account.

GOT the beat(GOT:Girls On Top)

Matching their intense concept, the idols posed powerfully in outfits of leather, satin, and glimmering accessories. The announcement created immense anticipation for their debut and the elation from fans who will see their favorite female artists share the stage with performance as the conceptual focal point.

The project also raises curiosity regarding what other unit combinations and themes SM Entertainment will pursue in the future.

The seven members of “GOT the beat” will reveal their debut song during SM Entertainment’s free global online concert, SMTOWN LIVE 2022: SMCU EXPRESS @KWANGYA. The concert occurs on January 1 2022 at 1 PM KST. Subsequently, the group’s debut track will make its official release on January 3 at 6 PM KST.

Meanwhile, fans can catch the debut stage of “GOT the beat” during SM’s upcoming concert. Fans worldwide can stream the monumental show via YouTube.