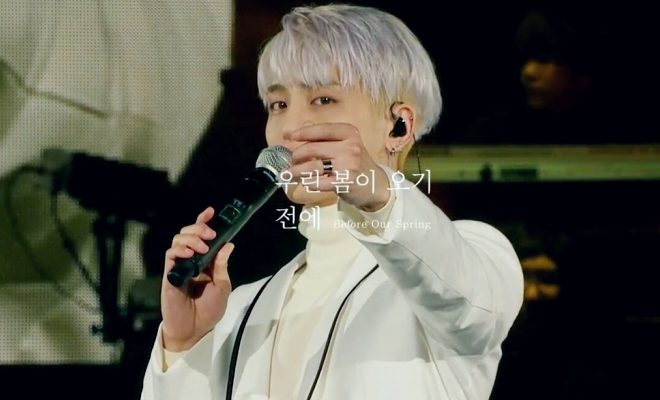 A screen capture from Jong Hyun's "Before Our Spring"

“Before Our Spring” MV is a poignant but beautiful tribute to SHINee’s Kim Jong Hyun.

Singer-songwriter Kim Jong Hyun spent his teenage years under the wings of the SM Entertainment, founded by Lee Soo Man, as a trainee before debuting in 2008 as a member of SHINee.

For the whole duration of his career in the K-Pop industry, Jong Hyun did not leave SM until his death last December 18 at the age of 27.

Following his passing, SM posted a photo along with a brief message in memory of the SHINee member on December 19.

“Jong Hyun, who loved music more than anyone, who enjoyed performing on stage, and who loved communicating with his fans through music, is the best artist. We will always remember him,” the message said.

On January 23, more than a month since Jong Hyun’s passing, SM released his second and final studio Poet | Artist, which consisted 11 tracks.

At the same day, the music video for its lead track “Shinin'” also came out, garnering more than four million views as of press time.

Fans called the singer-songwriter’s posthumous album a “masterpiece”, and praised his artistry.

Read more: “Always Be With You” – How K-Pop Fans React To Jong Hyun’s Final Gift

On January 24, the music video of “Before Our Spring” was released. It contained clips and behind-the-scene footage of Jong Hyun throughout his career as SHINee’s main vocal.

The video began with a talking and laughing clip of Jong Hyun. Most of the clips feature the singer-songwriter smiling and laughing during concerts and shoots, and with his fans.

Fans applauded SM for a beautiful tribute to the SHINee member, and thanked the company for being considerate and handling the passing of Jong Hyun “as humanly as possible.”

“They have been very considerate and showed nothing but love and respect to him, to his family, to us, since then,” a fan wrote.

SM’s tribute video for Jonghyun was done with poise. There are many reasons to hate them as a company but they have handled this whole situation as humanly as possible and I’m so thankful, as a Shawol.

You know, I know SM is not the best company and they haven't done enough for SHINee but I'm very thankful to them, or at least to the team in charge of SHINee/Jonghyun. They have been very considerate and show nothing but love and respect to him, his family and us since then

Other fans also cautioned others to “watch it when you are ready” as it may be emotionally unbearable. Some fans shared crying and finding comfort while watching the music video.

Fans also took the opportunity to express their gratitude and love for the singer-songwriter.

The Before Our Spring MV itself isn't that sad because it's literally just clips of Jonghyun smiling and being cute, but the fact that it's a tribute is a lot to bear, so please watch it when you're ready. ;;; <3

The love that Kim Jonghyun had for his Shawols was so pure and genuine. What he had with us was something special. It will never ever be forgotten. pic.twitter.com/4H9jCSxQDV

It’s okay, it’s okay while showing Shawols. Even though I cried I find it comforting thank you Jonghyun,
You really did well. #POET_ARTIST pic.twitter.com/1fzpgJ7fwq

All proceeds from the Poet | Artist will be used for the creation of a charitable foundation by Jong Hyun’s mother to help people in need.