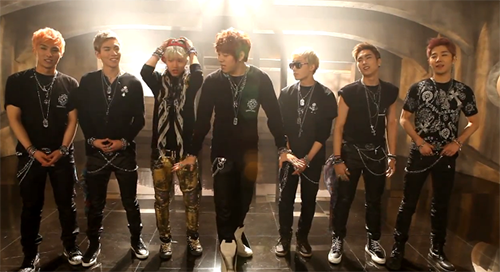 Coed School sub-group SPEED released its debut album Superior SPEED earlier this year and has prepared to make a return with a repackaged album entitled F-1RST REPACKAGE BLOW SPEED. SPEED has worked with Brave  Brothers to produce the upcoming repackaged album. Along with the track list from Superior SPEED, the album will include two more songs and Pain is set to be the title track.

The full music video for Pain will be released on February 20. In the meantime, check out SPEED’s music video teaser for Pain below:

Hellokpop, as an independent Korean entertainment news website (without influence from any agency or corporation), we need your support! If you have enjoyed our work, consider to support us with a one-time or recurring donation from as low as US$5 to keep our site going! Donate securely below via Stripe, Paypal, Apple Pay or Google Wallet.
FacebookTwitter
SubscribeGoogleWhatsappPinterestDiggRedditStumbleuponVkWeiboPocketTumblrMailMeneameOdnoklassniki
Related ItemsBrave BrothersCoed SchoolF-1SRT REPACKAGE BLOW SPEEDmusic videoSPEEDSuperior SPEEDteaser
← Previous Story Malaysian artist Mizz Nina collaborates with Jay Park: “Around The World” single cover revealed
Next Story → Bora Ju releases PV “Without You” and interview video