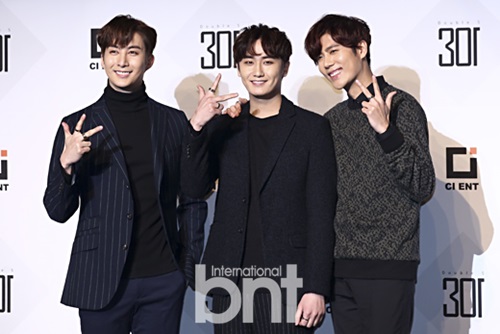 SS301 Returns After A 7-Year Hiatus

SS301 is the sub-unit of the boy group SS501, including three members Heo Young Saeng, Kim Kyu Jong, and Kim Hyung Jun. Since its hit OST release Because I’m Stupid of the popoular drama Boys Over Flowers, the boys had yet to drop any new products.

After a 7 year-long hiatus, the trio marked their highly-anticipated comeback by dropping the new album ETERNAL 5, which shows their musical maturity and brings fans great surprise. The album’s lead track, titled Pain, is about a broken-hearted man who suffers grief from breaking up with his beloved girlfriend.

On the same day with the album release, the boys held a comeback showcase at Lotte Card Art Center in Seogyo-dong, Seoul.

Check out the clips below:

Hellokpop, as an independent Korean entertainment news website (without influence from any agency or corporation), we need your support! If you have enjoyed our work, consider to support us with a one-time or recurring donation from as low as US$5 to keep our site going! Donate securely below via Stripe, Paypal, Apple Pay or Google Wallet.
28
SHARES
FacebookTwitter
SubscribeGoogleWhatsappPinterestDiggRedditStumbleuponVkWeiboPocketTumblrMailMeneameOdnoklassniki
Related ItemsBecause I’m StupidBoys Over FlowersETERNAL 5Heo Young SaengKim Hyun JoongKim Hyung JunKim Kyu JongPainPark Jung MinSS301ss501
← Previous Story EXID Holds First Concert On Valentine’s Day
Next Story → SHINee’s Taemin Goes Dark & Dangerous In ‘Press Your Number’ MV