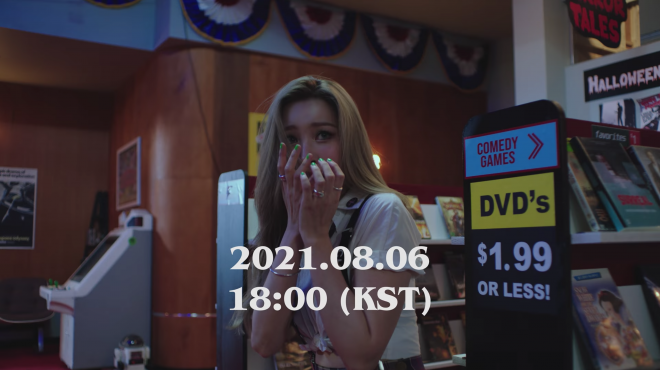 Sunmi unleashes the unexpected in an action-packed music video teaser for “You Can’t Sit With Us”.

Sunmi surprised fans with the contents of the music video teaser for, “You Can’t Sit With Us”. The song is the title track of her upcoming mini-album, 1/6, which releases on August 6. The project received immense attention as of late in response to stunning concept images, which teased a ‘high-teen’ or retro concept. However, Sunmi twisted expectations after revealing a thrilling music video teaser that surprised fans with its action-filled scenes.

The video opens in a DVD rental store, showing Sunmi and two friends choosing their DVD selections. However, as the store lights flicker, the artist’s two friends see something startling. Both scream in response, causing Sunmi to turn and scream as well.

The group is quickly surrounded by zombies, engaging in defensive gunfire. The last scene displays Sunmi standing on top of a car with a large gun, surrounded by approaching zombies with arms raised, attempting to reach her.

The events of the teaser took fans by surprise in contrast to previously released concept images. Through the photos, the artist depicted a lovely and kitsch atmosphere, embodying the styling of the ’90s, and emanating vintage glamour.

The artist maintains this retro-feel through her appearance in the teaser in addition to the upbeat melody that plays at its end, as well as the lyrics. The singer croons, “Who do you think you are? / You can’t sit with us”, reminding fans of old high school films.

However, the addition of the unconventional zombie plot raises excitement for the full release.

1/6 includes six tracks, all of which the artist penned lyrics for herself. Additionally, Sunmi contributed to composing four of them. The songs included are “You Can’t Sit With Us”, “SUNNY”, “1/6”, “Call”, “Narcissism”, and “Borderline”.