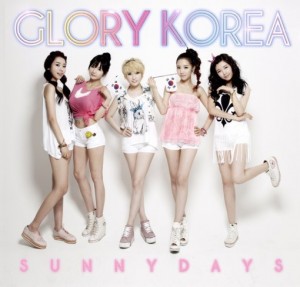 In light of the 2012 London Olympics commencing ten days later, artistes have been releasing various ‘Olympic cheer songs’, and using different methods to cheer on the Korean athletes competing in this year’s Games. Fresh rookies Sunny Days have recently joined the list of artistes releasing cheers for the Olympics, with their new track Glory Korea.

The craze of releasing cheer songs for the Olympics was initiated by Psy, beginning with Champion in 2002 and then later with We Are The One in 2006. Releasing yet another song KOREA on 27June 2012, Psy has again garnered much interest in the event. Together with the National Centre for Korean Traditional Performing Arts, Psy has used his own unique style to create this new outstanding track that blends both traditional Korean music and Western music together.

Other idols have also produced songs with the intention to cheer on the country’s representatives. In May, 48 idols-from SISTAR, 2PM, 4Minute, Miss A, MBLAQ, ZE:A, Nine Muses, Dal Shabet and B1A4-participated in Samsung’s Galaxy SIII Stadium Campaign, lending their voices to the song Win the Day (Everyone’s Effort). Besides being a part of Samsung’s Team III, 2PM also released a song Share the Beat on the 11th of July, along with the slogan ‘Let’s Share the Beat, Enjoy the Thrill’.

Comedian Yoo Se Yoon from the comical duo UV personally wrote the lyrics and composed the song Luck to Everyone. From the 5th to the 27th of July, citizens will be able to upload their own videos of their own versions to the song, and the amassed videos will be edited to create the ultimate cheering song for Korea.

On the 17th of July, rookie vocalists Sunny Days declared their wish for Korea’s victory through Glory Korea. With a strong rock sound, fancy guitar compositions and electronic beats and Sunny Days’ members’ amazing vocal abilities, the harmony created in the song is enough to make one’s heart race while listening to it.

Sunny Days’ members said that “as citizens of Korea, if [their] song could give a bit of support to the athletes participating in the Olympics, [they] would sing it with hearts sincerely wishing for their success”.

Have you caught the Olympic fever yet? If not, you might want to listen to Sunny Days’ Glory Korea to get yourself pumped up and ready to relish the excitement surrounding the Games!

In related news, other male stars also show support for the 2012 London Olympics in the upcoming InStyle magazine.