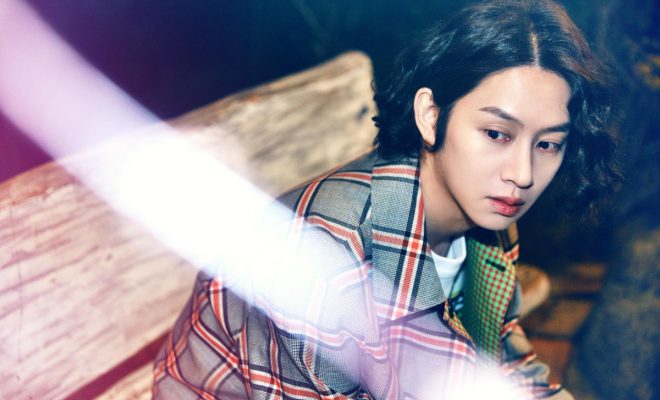 Super Junior’s Kim Heechul may not take over the entire universe anytime soon, but with his new song, he continues to prove that he is a global star.

The Super Junior’s member makes his debut as a solo artist after 14 years in the business with his first digital single “Old Movie” on April 24. An authentic, rock ballad with melancholic and sensible sound, the single and its music video capture the emotions of two lovers breaking up. Fellow Super Junior members Donghae and Shindong helped their hyung with Donghae working with him in writing the lyrics and Shindong directing the music video.

After its release, “Old Movie” went on to secure the number one spot in seven countries on iTunes charts. It led the charts in countries such as El Salvador, Saudi Arabia, Hong Kong, Macau, and the Philippines — once again proving the unwavering popularity of Heechul and Super Junior worldwide.

In addition to his solo debut, Heechul will greet fans with an event titled Universal Star Kim Heechul’s “HEETalk”. It will take place at the K-Art Hall in Seoul on May 4 and 5. According to Label SJ, the event will see the Super Junior member share new memories with ELFs and reminisce the precious time they had in the past years. Attendees can also look forward to a live performance of his new song at the event.

Tickets to HEETalk will be available starting April 26 at 6 p.m. KST via Yes24 Ticket for fan club members. Meanwhile, general ticket sale will begin on the same day at 8 p.m. KST.

Hellokpop, as an independent Korean entertainment news website (without influence from any agency or corporation), we need your support! If you have enjoyed our work, consider to support us with a one-time or recurring donation from as low as US$5 to keep our site going! Donate securely below via Stripe, Paypal, Apple Pay or Google Wallet.
FacebookTwitter
SubscribeGoogleWhatsappPinterestDiggRedditStumbleuponVkWeiboPocketTumblrMailMeneameOdnoklassniki
Related ItemsHeechulSuper Junior
← Previous Story INFINITE’s Nam Woo Hyun Revealed To Be Under Preparation For Solo Comeback
Next Story → Park Bom To Release Her First Solo Album This May