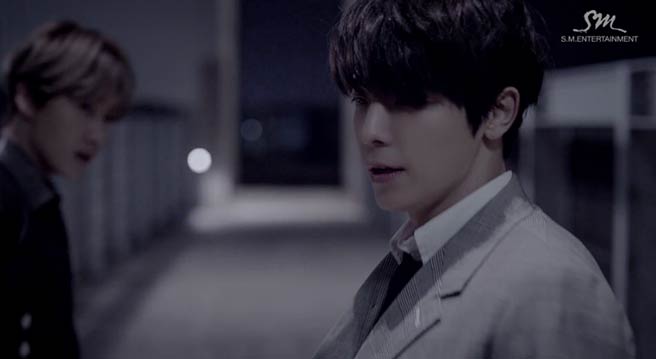 The teasers were revealed through SM Entertainment’s YouTube channel on March 3. The first teaser is simply made in black-and-white with the camera spinning around the two, who are standing on the rooftop of a building. On the other hand, the second teaser shows Donghae in a Lamborghini car, while Eunhyuk is on the bridge, running with a flower bouquet in his hand, with both being haunted by the flashbacks of their ex-girlfriends.

In both teasers, the boys are seen miserably struggling with their sadness and desperation, matching perfectly with the emotional instrumental background music.

The duo’s first album, titled The Beat Goes On, will be available online on March 6, and offline three days later on March 9.

Watch the two teasers for Growing Pains below:

Hellokpop, as an independent Korean entertainment news website (without influence from any agency or corporation), we need your support! If you have enjoyed our work, consider to support us with a one-time or recurring donation from as low as US$5 to keep our site going! Donate securely below via Stripe, Paypal, Apple Pay or Google Wallet.
123
SHARES
FacebookTwitter
SubscribeGoogleWhatsappPinterestDiggRedditStumbleuponVkWeiboPocketTumblrMailMeneameOdnoklassniki
Related ItemsD&EDonghaeEunhyukGrowing PainslistquizSM EntertainmentSuper JuniorThe Beat Goes On
← Previous Story JYJ’s Junsu Drops Artistic ‘Flower’ MV
Next Story → Super Junior D&E Drops ‘The Beat Goes On’ Album and “Growing Pains” MV