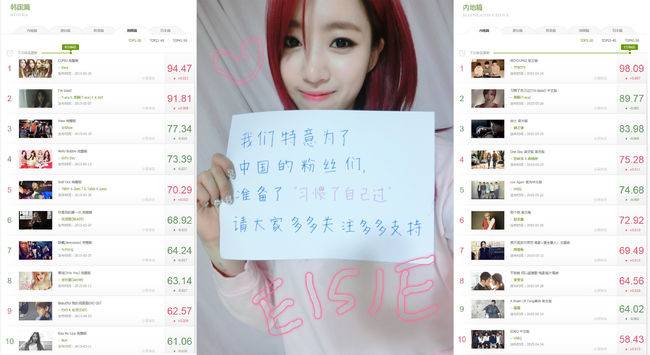 By Community | May 28, 2015
31
SHARES
FacebookTwitter
SubscribeGoogleWhatsappPinterestDiggRedditStumbleuponVkWeiboPocketTumblrMailMeneameOdnoklassniki

Her Chinese version of the song ranked 2nd on YinYueTai, a popular Chinese music website’s music video chart. She is the only solo Korean artist who has made it to the list.

Her original Korean MV of I’m Good has been switching between 1st and 2nd place for the past few weeks. In her Chinese MV, she sings in both Korean and Mandarin, though some fans commented that her Chinese pronunciation is not really accurate.

Our Eunjung still did a good job! A for effort! GIF: Tumblr

Even so, given the high chart ranking, the Chinese viewers are still loving her songs.