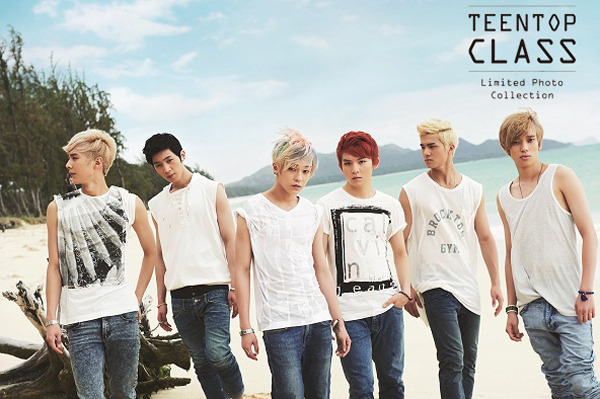 Have you heard Teen Top‘s latest single Rocking from the mini album Teen Top Class? The thousand attendees of the recently concluded KCON 2013 held Los Angeles Memorial Sports Arena were lucky to have seen the first live performance of the song before the music video was released on YouTube.

In the music video uploaded by TOP Media, the boys are rocking out in their red and gold outfits which seem to match the red hair of one of the rappers, L.Joe. Rocking has a beat that’s perfect for a clubbing mix, a melody far from their previous single Miss Right.

It’s No Joke, the group is going to “rock it, drop it, top it”. They claimed it not just once, not twice, but eight times! Four times in the intro and then repeated it again, just in case you forgot about it, at the end.  Once more, the members never really miss a jumping step in their choreography in any of their dance songs.

Followed by the release of the music video, TOP Media announced that the fans can purchase the album on iTunes for only $5.94 at: https://itunes.apple.com/us/album/tintab-keullaeseu-teen-top/id693895277

Watch the boys rocking  in their music video below:

Listen to their album track preview below:

The album will be available at shops in Korea on August 27. Remember to watch the music video directly on Teen Top’s official YouTube channel: TeenzOnTop as there are other channels re-uploading the same quality videos from TOP Media.