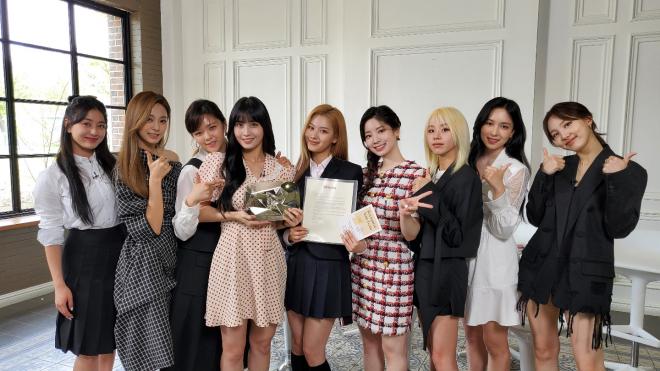 Just recently, the female nonet posted a video on YouTube to celebrate their latest achievement. The girls received a Diamond Play Button from YouTube after hitting 10 million subscribers on their official channel.

Remarkably, TWICE became the fourth K-pop act to obtain the award. Other idol groups who achieved the feat are BIGBANG, BTS, and BLACKPINK.

In the video, Jihyo, Nayeon, Jeongyeon, Momo, Sana, Mina, Dahyun, Chaeyoung, and Tzuyu cheered together and unboxed the award.

Jeongyeon playfully asked, “Let’s divide this into nine pieces.” Nayeon also suggested, “Or we can go around placing it in each member’s room for a month!” Momo added, “Or each holding it for a year.”

Thankful for the recognition, the girls then took time to express their gratitude to fans saying, “We will keep on presenting you with fun and beautiful videos on YouTube! Thank you, ONCE!”

Meanwhile, in related news, TWICE recently made their highly-awaited debut appearance on The Kelly Clarkson Show. Though sans Jeongyeon, the girls wowed viewers as they performed their latest track “CRY FOR ME.”