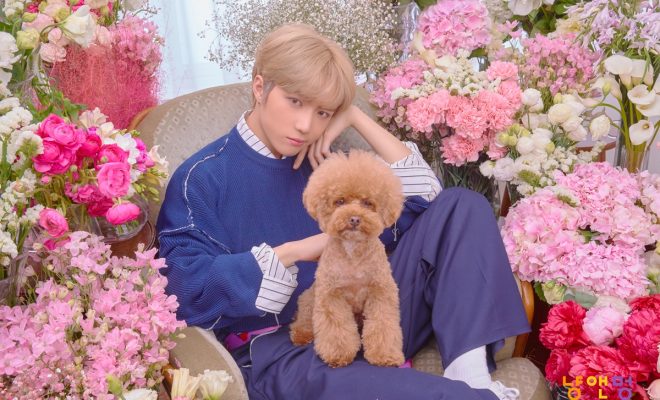 The level of cuteness went high with the concept photos of Beomgyu!

TXT’s Beomgyu got fans screaming “adorable” in the new set of concept photos for “Cat & Dog” which brighten people’s social media feeds at midnight of April 18.

The TXT member teamed up with an equally charming dog in the photos. The cute duo posed amid a colorful set filled with flowers that perfectly captures the beauty of spring.

Previously, Big Hit Entertainment asked fans to “Guess Who?”, uploading a photo of the dog on the flowery set.

The entertainment company once again turned to fans to guess which TXT member will feature in the next concept photos. While the first hint only showed a dog alone in the set, the second photo hint brought a cat into the photograph.

Based on fans’ theories, the order of the release of the concept photos will follow the same order as the sketching videos.

From 12 noon of April 15 until 8 p.m. KST of the same day, Big Hit Entertainment released sketching films of each member. The completed images on the films show the boys sporting animal ears.

TXT will release new content in relation to “Cat & Dog”, a track from its debut extended play The Dream Chapter: STAR, on April 25 at 12 a.m. KST. The upcoming release comes almost two months since Yeonjun, Soobin, Huening Kai, Taehyun, and Beomgyu made their official debut as TXT on March 4.

In addition to “Cat & Dog”, the boys will treat their fans to live performances this April through their six-show debut showcase in the United States. They will perform in major US cities, namely New York, Chicago, Los Angeles, Dallas, Orlando, and Atlanta.