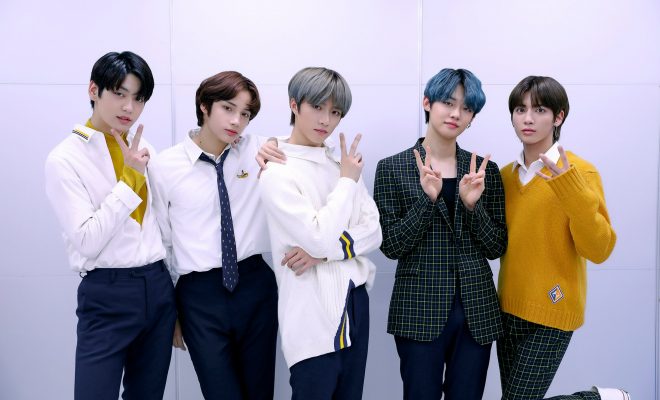 Whether they are an Angel Or Devil, TXT exudes irresistible charms in their latest MV

TXT returns with new content for their fans. On November 29 at 12 AM KST, BigHit Entertainment released the music video of their song “Angel Or Devil”. Earlier, the agency also had uploaded the individual teasers of each of the members wherein the boys exhibit their playfulness

Continuing with a similar expression from the individual teasers, TXT delves deeper into showcasing their boyish charms in the music video. The music video captures the mischievousness in the boys’ eyes accompanied by their sharp choreography.

Adding to the fun-filled video are the changing neon graphics that depict the angel and devil symbols which match well with the gestures conveyed in the lyrics. There were also a variety of shooting and editing techniques such as swift camera movements and transitions from monochrome to color and vice-versa that adds to the sophisticated visuals of the video.

“Angel Or Devil” is a b-side track from the group’s first full-album The Dream Chapter: Magic. Previously, the group had released their album The Dream Chapter: Magic on October 21 with “9 and Three Quarters (Runaway)” as the title track. The group has also released a new music video for “Magic Island” which is one of the b-sides from the album as well on November 17.

“Angel Or Devil” is a song of trendy hip hop genre with distinctive sounds. The lyrics of the song talk about the dilemma of making the right choice when pursuing a relationship.

Meanwhile, TXT has already won four Rookie Of The Year awards this year and has established themselves as the most popular newcomers. They will also be promoting their song in KBS2 TV’s Music Bank.

Hellokpop, as an independent Korean entertainment news website (without influence from any agency or corporation), we need your support! If you have enjoyed our work, consider to support us with a one-time or recurring donation from as low as US$5 to keep our site going! Donate securely below via Stripe, Paypal, Apple Pay or Google Wallet.
FacebookTwitter
SubscribeGoogleWhatsappPinterestDiggRedditStumbleuponVkWeiboPocketTumblrMailMeneameOdnoklassniki
Related ItemsAngel Or Devil MVTomorrow X TogetherTXTTXT Angel Or Devil투모로우바이투게더
← Previous Story Stray Kids Makes A Critically-Ill Fan’s Dream Come True Through Make-A-Wish Korea
Next Story → A List Of IU’s Cute And Clueless Moments That Uaenas Will Always Love