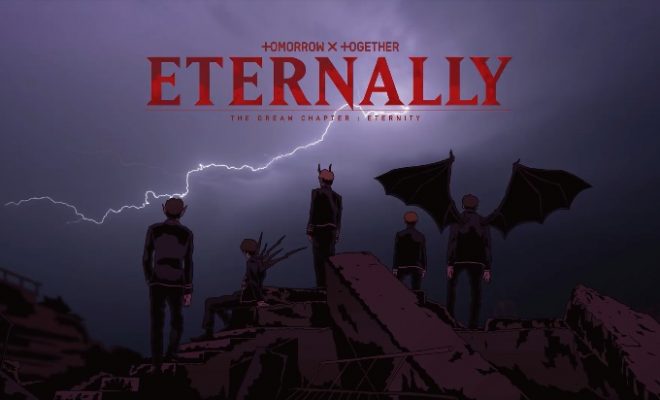 TXT Unleashes Magic Amidst The Mayhem In “Eternally” Music Video

TXT unveils an out-of-this-world video for their track “Eternally”!

After surprising fans with a wild and edgy music video of their heart thumping b-side track “PUMA,” TXT treated fans to something fantastical with the music video for their track “Eternally.”

The group teased fans with ethereal individual snippets for the same. In the teasers, the members look mesmerizing and mystifying all at once. Each member channels a certain form of a mythical creature that is quite symbolic of the story within all of their albums thus far.

“Eternally” is the sixth track on their album The Dream Chapter: Eternity and marks the possible end of The Dream series as well. The track has a lulling energy with its acoustic pop and alternative R&B composition.

On June 29, the group unveiled a grand 19-minute-long music video for “Eternally”. It would be be an understatement to just say that the video left viewers speechless. The video is divided into seven sections that left viewers awestruck.

The scene opens in a rehearsal room as the group spend time together. Meanwhile, Soobin walks over to a door that reveals an empty elevator after which lights start to flicker and alarms begin ringing. This commences a mystifying journey for each member. This part symbolizes how at the end of the night, the world became fragmented and ruined for the boys. They get engulfed by darkness as the memories of their future together begin fading away.

Section 2 : Song Of The Stars

The soft piano melody sets a soul stirring tone to the ambiance of this sequence. Soobin transcends into a parallel realm and finds himself face to face with his younger self. This overwhelms him and he starts to cry before a specter comes up to him and hugs him. This still then ends with the phrase that reads as, “When I wake up from a familiar dream, tears always flow.”

The focus is on Yeonjun this time as he finds himself isolated in a decrepit and desolate setting wherein he is surrounded by dark clouds. Viewers may have to prepare for a spine-chilling moment when Yeonjun leans down and sees his dead body lying amidst the ruins. The clip ends with a cat calling out to him as the words, “At the time, I thought it was salvation,” flash across the screen.

Standing in a dark space, Beomgyu looks perplexed as he sees himself in multiple glass screens that suddenly transform into a door bearing the number 17. On opening the door, he is taken aback by what he sees. He watches himself being cornered by a dark force who tries to fight him as he protects a secret book. In addition to that, it makes for a surreal moment when he looks eye to eye, albeit through a phone screen, at himself as Beomgyu witnesses his own transformation from a normal boy to a mystical ghoul like creature before he thinks to himself, “Which way should I believe?”

Standing in a field of blooming purple flowers, Taehyun looks over and sees Yeonjun sitting across the field. He calls out to him and when Yeonjun doesn’t answer, Taehyun walks over to him only to see Yeonjun’s pale body covered in thorns as he bleeds in purple – the very blood that makes the flowers bloom as the message at the end reads, “We’ll find a way.”

Huening Kai follows the specter of the girl that hugged Soobin to a stairway. The singer climbs the stairway that leads to a door which opens in a paradise-like place. As he stands at the doorway, he sees another door opening. He then sees his band mates on the other side and proceeds to walk over to them. This clip ends rather abruptly while the words, “I cant’t get a hold of them even if I’m desperate to reach out,” appear.

Section 7 : The Beginning Of An End

They go right back to the start in this sequence as the setting goes back to normal when Soobin comes back into the rehearsal room. While it seems like nothing even happened, Soobin stands alone in front of a mirror while holding a dice from when he went into the parallel universe.

Thus, the video concludes with the words, “The boys felt as though they traveled far in the blink of an eye. The boys thought with fear, “Is this all just a dream?,” The boys didn’t know that this was just the beginning of chaos.”

The structure of the music video is surreal and stunning. TXT looked absolutely ethereal and dazzling in each of the stills within the video. “Eternally” is an ode to their past selves as they come to a realization that living in a world of dreams isn’t ideal. The video decoded not just this album, but the entire series as well.

Their previous two chapters of The Dream album series showcased the innocence and imagination of youth. However, in The Dream Chapter: Eternal the group face the harsh truths of reality.

Besides this, the video ended at a cliffhanger with Soobin holding out the dice in his hand. The moment is a realization that maybe it wasn’t a dream after all—therefore marking the beginning of chaos. The scene and the video overall has only raised anticipations of MOA for the next chapter by TXT.