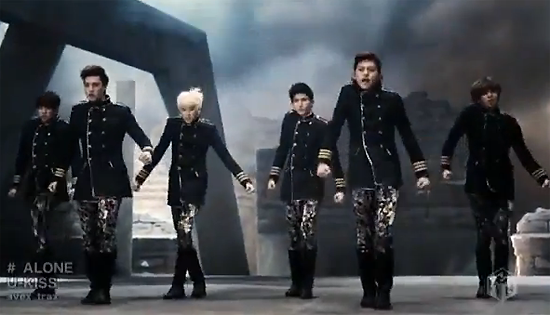 The album’s title song, also entitled Alone, is an energetic Japanese Eurobeat track with a synthesized tune and dubstep breakdown. The music video for the song also features demanding choreography fitting to the song type as well as charismatic individual clips.

Alone will be officially released on February 13 and will be available for purchase in four different versions. In the meantime, check out U-KISS’ PV for Alone below:

Hellokpop, as an independent Korean entertainment news website (without influence from any agency or corporation), we need your support! If you have enjoyed our work, consider to support us with a one-time or recurring donation from as low as US$5 to keep our site going! Donate securely below via Stripe, Paypal, Apple Pay or Google Wallet.
FacebookTwitter
SubscribeGoogleWhatsappPinterestDiggRedditStumbleuponVkWeiboPocketTumblrMailMeneameOdnoklassniki
Related Items6th Japanese singleAloneJapanesePVU-KISS
← Previous Story BEG’s JeA releases music video for “Stray Cat”
Next Story → MYNAME reveals teaser images for new song