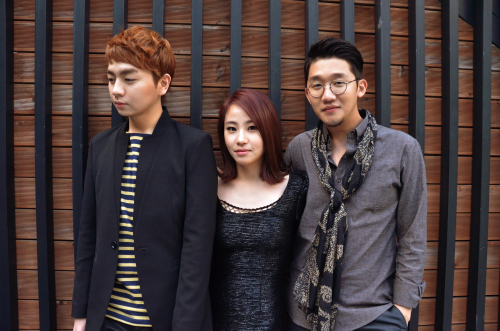 The voices of each member is their own, but the emotion for the three vocals is one emotion. Therefore creating a interesting, curious creation, this group, Urban Zakapa, is returning to their fans with their second official album, 02.

The songs I Hate You and River have already received hot attention from their fans, which are two of the songs that will be in the new album. It seems that they were able to touch their fans as each member were in a broken relationship status, so was able to put together sadness and soothing emotions together with their voices. Of course, they are now doing well meeting with new lovers.

With many people looking forward to the new album release of 02 on October 30th, they put a lot of effort into ‘subtraction’ while preparing for this new album. They tried to not only lessen the burden of the instruments in the background but also their vocals as well.

“In the last album we put a lot of power into the songs so it was a little bit of a burden. While preparing for the new album, we tried to take out as much as we could. So that it could be a more comfortable listen,” stated Jo Hyuna.

“With solo songs, it has a benefit for each vocalist’s color into them. I would be happy if you could listen thoroughly to each vocals’ different story,” said Park YongIn.

“Solo songs don’t mean that we hold more deeper value to them. We are able to feel the preciousness of each member when we work on solo songs. We like it better and have a better result of vocal color when the three of us sing together rather than when we are solo,” explained Jo Hyuna.

During the past September, Urban Zakapa held an open concert at the Olympic Hall that filled 3,000 seats. What kind of energy made it possible for you to sing so much passion?

“The concert in September was indeed very special. For the opening, we tried something new. We took the lift and went high up, we were only able to see the full audience. When we saw all the seats filled with our audience, it really fascinated us,” stated Park YongIn.

“It was like a dream. But to tell you the truth, the concert that we held at Yonsei University on July of 2011 left a great memory for me. Maybe it was because it has been a while since our last performance, but the shouting and cheering of the audience…. it sounded like at least 10,000 people were filling the place. My heart raced,” said Kwon SoonIl.

Urban Zakapa is becoming known as the new genre of performances. We’re curious if the members every has any stage freights ever.

“There’s no special jinx or anything. But that doesn’t mean that we don’t get nervous at all. Us three members get so nervous the day before, we cannot sleep,” explained Park YongIn.

“In the past, I wasn’t able to get any sleep but right now it’s a lot better. Last year before the Busan performance, there was an event that made me very upset, so I went for a drink the day before, but that actually helped me sleep and get rest for the performance,” stated Kwon SoonIl.

“I always try to schedule and plan things and if one thing goes wrong, I feel a little unstable. I think actually planning things like that makes more mistakes so for December, I’m planning on not planning or scheduling for the performance,” said Jo Hyuna. 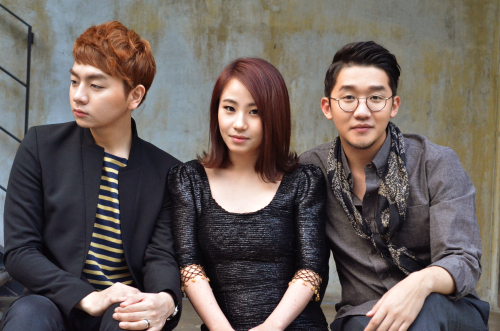 It’s known that during the creation of the 2nd album, each member had broken up with their lovers. Currently, we heard some were in a relationship again, we’re curious what your ideals are.

“I want to meet someone who isn’t involved in music. My ideal type is a skinny, short hair, and has a city image,” said Park YongIn.

“I want to get married before 30. I want to meet someone who is orderly and live an arranged and kind of orderly life. But when I think of love, it reminds me a pure love from back in 6th grade. I actually still dream of pure love and relationship but as we age I think it’s harder (laughs),” says Jo Hyuna.

“I want to do everything we can as we are in a relationship. My ideal is someone who I can relate to a lot in our conversations and understand each other. Even now, the person I’m meeting, she’s like that. We’ve even talked on the phone for 9 hours. (laughs)” stated Kwon SoonIl.

“We have this trust that only come only after you’ve spent a long amount of time with someone. Even when we aren’t drunk, they are people that I want to thank. Music with these people are an everyday routine for me. Because encouragement, stress, happiness all these feelings, I get it through music.” said Park YongIn.

“Urban Zakapa is a place for me to go back to, it’s home. A person, wherever they may be, always needs a place to return. I feel that my members are like that and I hope that the members feel that way as well. To me music is something obvious. Something there’s no end to… even to difficult music, there is no boredom to it.” explained Jo Hyuna.

“To me Urban Zakapa is a mysterious thing. It’s work but they are the people I am most comfortable and close with. Music to me is something that can deliver my situation well. Music is the best way to explain the past, present, and future.” said Kwon SoonIl.