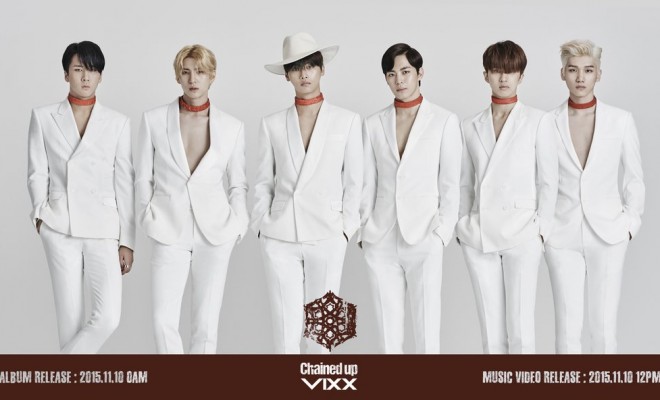 VIXX Unveils MV For Chinese Version Of ‘Chained up’

The Chinese music market is one that many K-pop groups aim to foray into to expand their international promotions, and VIXX is no exception. The group is further solidifying its position in the market by releasing a music video for the Chinese version of the group’s latest single, Chained up!

The boys impress fans with their language skills and dance moves, and the video is shot similarly to the original Korean version.

This, however, isn’t VIXX’s first time to release a song in Chinese. The group already dropped a version of Error in the language. Moreover, VIXX’s online reality program VIXX TV is broadcast on MTV Taiwan on every Monday through Fridays, starting back on January 26. The first season of VIXX TV is the only idol reality show in Korea that has aired 100 episodes.

In related news, VIXX is holding an exhibition titled VIXX EXHIBITION 2015 at the Gangnam Tourist Information Center, showcasing the group’s albums, props, and merchandises throughout the years. The group is set to release its 2016 VIXX’s Season’s Greetings as well.