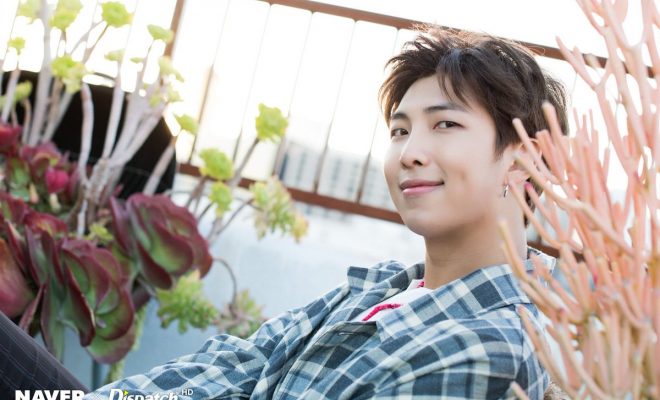 BTS’ RM is a gift from the intellectual gods – and even American rapper and producer Wale thinks so.

“Rap Monster’s like a good friend of mine,” American rapper and record producer Wale said during an interview with MTV TRL. He had previously worked with the BTS leader in 2017 for a special collaborative single called “Change”, where he got to witness RM’s outstanding talent personally.

“His energy, his vibe is so good. I know he’s one of those dudes, if he spent enough time in America, he could be one of the best producer, writers – he’s that good,” he admitted, praising his fellow rapper’s exceptional abilities as a performer, producer, and writer.

READ: BTS’ Rapline Members Will Each Get Solo Tracks for “Love Yourself: Answer” And We’re Screaming!

RM had written and produced most of BTS’ tracks ever since the group debuted, and has over 100 songs accredited under his name by the Korea Music Copyright Association. He has also released his own solo mixtape entitled RM in 2015, and has worked with the likes of Warren G, Gaeko, Krizz Kaliko, MFBTY, and Primary.

He is MY rap monster cuz he is a rap monsters. I truly wish we got to go deeper in to our creativity . I wanna push him to show 🇺🇸 his vibe https://t.co/JgN3AGjGAg

Wale also gave a shoutout to BTS’ ARMYs, who had shown immense support to the single both during its release and even a year after. “They flew me to South Korea to shoot a song called “Change” and obviously everybody knows about the ARMY, BTS’ fan base. They show me so much love. They just embrace me, and I was like, yo this is different,” he said.

“I was going on two hours of sleep, but I got to the video, we did that video. It was cold outside and everything, but I was like super grateful,” he added, expressing his appreciation for the fans who had supported his and RM’s collaboration which, just like most BTS songs, tackles social issues and encouraged listeners to make a change.

What are your thoughts on Wale’s amazing words about BTS’ RM? Let us know by leaving a comment below, giving us a holler on Facebook, or tweeting us at @hellokpop!

Hellokpop, as an independent Korean entertainment news website (without influence from any agency or corporation), we need your support! If you have enjoyed our work, consider to support us with a one-time or recurring donation from as low as US$5 to keep our site going! Donate securely below via Stripe, Paypal, Apple Pay or Google Wallet.
FacebookTwitter
SubscribeGoogleWhatsappPinterestDiggRedditStumbleuponVkWeiboPocketTumblrMailMeneameOdnoklassniki
Related ItemsBangtan SonyeondanBTSBTS RMrap monsterRMwalewale rap monster
← Previous Story iKON Members Are Ready To Move On In “Goodbye Road”
Next Story → BTS Tells The Youth To “Speak Yourself” At The 73rd UN General Assembly