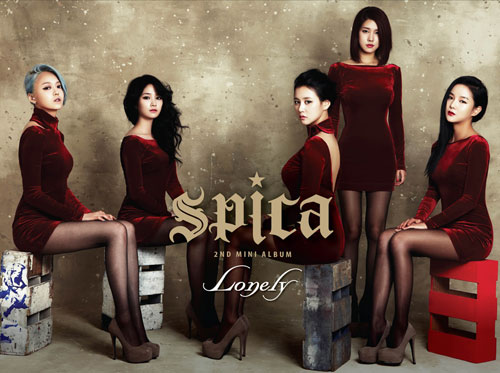 What is SPICA’s new concept?

Through SPICA‘s agency B2M Entertainment‘s Twitter account and Facebook page, we were able to find out about their comeback. They have released another photo; apparently the photo is to be their new mini album LONELY‘s jacket photo.

In the photo, the members are wearing red velvet mini dresses. It’s a different concept than the previous photo they revealed earlier this week. If the previous teaser photos showed a slightly sensual and young woman like image, the new album cover photo shows a matured image which is drawing attention from the public.

The new album is said to be produced by top producer Sweet Tune and is said to contain songs that some of the SPICA members themselves have created. Because of that, fans are looking forward to the kind of songs which have been selected for this new mini album. The title song  LONELY, has a new retro beat with a addicting melody and a slight scent of nostalgia.

Scheduled for release on November 16; SPICA’s title song LONELY‘s teaser video will then be revealed.