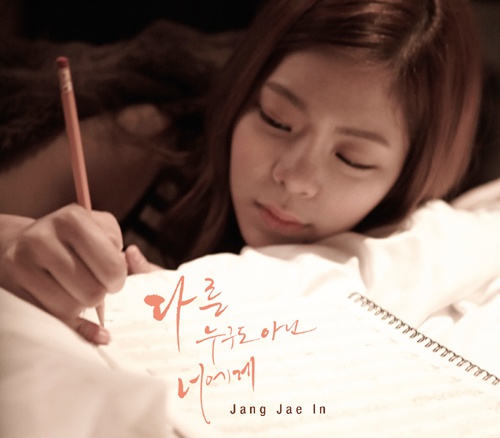 Who would have guessed? Jang Jae In steps out as a true artist

It is very rare to witness a career slowly evolving as Jang Jae In‘s did. The 21-year-old first made a name for herself on the reality show, Superstar K2. After her elimination from the Mnet show, she confirmed her mainstream power by releasing several OST that were well received, quickly followed by her first mini album, Day Breaker. At this point, it seemed like her career would follow a smooth and mellow path. But the highly emotional December release of Winter Night (for which she penned the lyrics herself) set her cosy career off course. This song was the first step towards the greater changes that occurred so far, in 2012.

Until this moment, Jang Jae In was still a part of Kiwi Entertainment, but her next release, No One Other Than You, would be a farewell to mainstream music, her agency, and external composers all together. Penning her own lyrics wasn’t enough anymore for the songwriter; eager to earn full control over her music and career. Hence the audacious decision to terminate her contract with her agency and go back to study music at Howon University while street performing. Thankfully, we didn’t have to wait too long before her comeback as a whole artist. Unleashed at the beginning of this month, Summer Night echoes her desire of independence displayed last winter.

For Jang Jae In, it is all about keeping the emotions true and flowing. Her arrangements knowingly remain very basic. But, as our own reviewer noted, the tone of her voice served by her outstanding technique are gliding over a vast sea of competent but uncharismatic singers. So high that one could daringly see her becoming the female Lee Seung Yeol as she slowly matures through her music. In an industry that makes every independent move such a forlorn attempt, it is a laudable SURPRISE to witness a singer stepping in as a true artist by taking her future into her own hands, while remaining consistent in her beautiful deliveries.

Hellokpop, as an independent Korean entertainment news website (without influence from any agency or corporation), we need your support! If you have enjoyed our work, consider to support us with a one-time or recurring donation from as low as US$5 to keep our site going! Donate securely below via Stripe, Paypal, Apple Pay or Google Wallet.
FacebookTwitter
SubscribeGoogleWhatsappPinterestDiggRedditStumbleuponVkWeiboPocketTumblrMailMeneameOdnoklassniki
Related ItemsDay BreakerHowon UniversityJang Jae InKiwi EntertainmentLee Seung YeolmnetNo One Other Than Yousummer nightSuperstar K2Winter Nightwwhg2012
← Previous Story Who would have guessed? The KOXX banks on idols
Next Story → SHINee releases ‘Dazzling Girl’ teaser photos of Taemin and Key