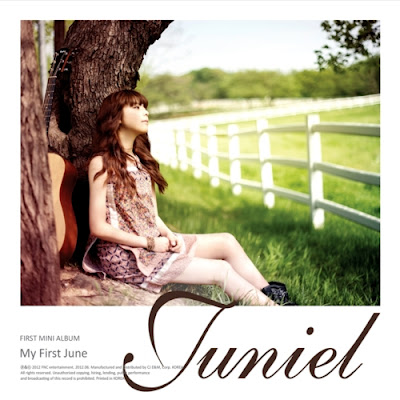 Who would have guessed? Juniel set to take over IU?

Amongst all the rookies coming out from big agencies, FNC Entertainment stole the show this year when they unveiled their first solo female singer, Juniel. Following the path of fellow stars CNBLUE, Juniel established herself in Japan first, before she debuted in Korea this June. With IU being such a phenomenon these days, every promising solo female act who makes its debut, is easily called to become the next nation’s little sister. But two months after her debut, more than a month after the end of her promotion, Juniel’s debut song, Illa Illa, has been consistent enough on the digital charts to bounce back within the weekly Top 10, ten weeks after release. She thus joins the privileged circle of longevity digital killers. In recent years, only Davichi, T-ara and IU have been able to pull such a trick. The difference is, of course, that Juniel didn’t have explosive sales upon release, which makes it easier for her to remain consistent in the charts with moderate but solid sales. Along with Busker Busker and Ailee, Juniel registers the greatest debut since Miss A no less. And a greater debut than the artist everyone wants to see her rival with, IU.

This thus puts us to consider; can Juniel actually become stronger than IU? Well, it is a split decision. In Japan, Juniel and IU are already on par; Juniel made the better Korean debut; she already proved in her debut album to have a superior dab hand at composing, her vocal abilities are also deemed by many observers to be greater. But, many artists and fellow sportsmen that were predicted to conquer the world, broke under pressure somewhere along the way. IU’s already proved she is one of kind, she survived many hardships that Juniel has yet to encounter. Plus, she has in her bags two undeniable assets. IU is a variety goddess who owes much of her success to the delightful and lovable personality that she never fails to display on screen. Added to that, she is a part of the second biggest entertainment agency of the country (Loen Entertainment has a 31.1% share of the Korean market), which provides her the greatest producers in the country to work on her albums. Even if Juniel isn’t doing quite bad for herself in that department, since FNC Entertainment is a fraction of the biggest agency of Korea (Mnet whose share is 34%. SM Entertainment‘s share is only 6.3% if anyone is interested in the matter). The battle is only beginning.

Time only will tell if Juniel can continue to rise above IU’s progression line, but right at the time when IU looks untouchable, it is such a unsettling SURPRISE to witness a delicate youngster playing the quiet troublemaker.