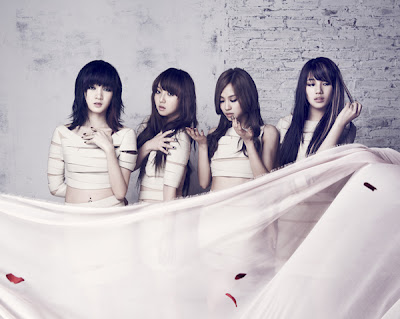 Who would have guessed? Miss A makes a lukewarm comeback

“I’ve started at the top and been working my way down ever since”. Those famous words once said by Orson Welles might find its echo in the mouth of Miss A one of these days, if the JYP protégées career apathetically continues to go downhill. Except that the means would be different. For Orson Welles, it was the search of artistic freedom that was responsible for it, and legendary film director is now better recognized for the movies that came at the end of his career; Miss A on the other hand, seem to be suffering of the common disease of people becoming famous overnight: self-satisfaction.

Miss A’s debut track, Good Girl Bad Girl was the greatest selling debut made by any artist in the digital era. The song went on to top the yearly digital charts of 2010 with a comfortable advance over any other contender. After the Breath appartée, Miss A made a double comeback in 2011, with the non-promoted Love Alone – ranked 181 – and Goodbye Baby that secured the 11th spot on the Yearly digital charts 2011. Miss A’s main title track still managed to make an impression last year, but it failed to live up to their debut expectations by ranking outside the Top 10. And their latest track, Touch, will, at most, secure a spot within the Yearly Top 30.

So far, it is not quite yet alarming, but the path followed by Miss A tends to look more and more worrying. Unless the girls get a kick in their pride and takes up the slack, I honestly don’t see any brighter days coming ahead of them. Miss A easily ranks in that category of “you’ve seen one, you’ve seen them all” performances. For quite some time now, their stages have been sullied by signs of complacency. From their offsetting flaws in synchronisation – that spark even in their latest MV! – to Jia‘s rap part on Touch being constantly skipped on stage; there is this constant feeling, in watching Miss A perform, that there is so much more and better that those girls could accomplish if they put their minds and their effort at it.

If Suzy casts enough light on her group for it to still cause a stir, Miss A definitely needs to get its act together. Their main enemy is themselves. “Enthusiasm” and “Professionalism“, those are the keys to Miss A’s rise back to the top. They are expected to come back again this year, so let’s hope the recent predominance of rival SISTAR over them will boost their motivation. Until then, to witness such a talented and able group working its way down in the ladder of success is UPSETTING; but was to be expected for a group that ceased to be exciting already too long ago.

Note: The views and opinions expressed in this article are solely of the individual and not of hellokpop as a whole. Sources : News and Pictures : Cracked.com  Gaon Daily Kpop     Video : MissA