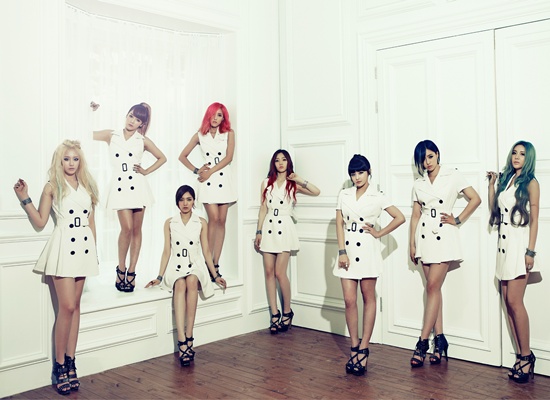 Who would have guessed? T-ara kills the charts

TTL, Bo Peep Bo Peep, Like The First Time, I Go Crazy Because of You, Why Are You Being Like This?, Roly Poly, Cry Cry, We Were In Love, all those songs dominated the charts at some point during 2009 to 2011 and they all bear one similarity; as you will have guessed, all those are T-ara‘s hit songs. Eight hit tracks in the span of 29 months; 4 of them hitting above the prestigious 3 million download mark; 2 of them cruising over 4 million. Ever since their July 2009 debut, T-ara has been the most constant and represented artist at the top of the charts. And there is plenty more to come.

Freshly crowned with the digital song of 2011, Roly Poly, T-ara kicked off 2012 in style, with Lovey Dovey. The trend setters were at it again in January and February, where they made a killing on music shows, as well as causing the very first stir of the year. Lovey Dovey, currently ranked 2nd on the yearly digital charts, is already one of the trademark songs of 2012.

After some drama about inner movements that kept the fans stimulated during the girls’ spring break, T-ara went against the flow of summer songs to promote the dark and futuristic concept of Day By Day. Due to the biggest controversy faced by the group, T-ara’s activities only spanned throughout the month of July.

T-ara’s alleged bullying case made such an impression over the internet, that the worst could be feared for T-ara. But while the hit makers are gearing up for the release of their follow-up song, this whole issue is slowly becoming old news as time goes on and netizens move onto the next current topic. Seven weeks after release, Day By Day is unconcernedly cruising within the Top 10 of most charts, after securing the 2nd digital spot on the July Monthly charts.

And, T-ara doesn’t only rely on digital results. The twelfth best physical seller of 2011 in Korea, sold another 38,000 albums last Month; bringing T-ara’s yearly tally over 120,000. With five months to go and two albums scheduled for the rest of the year, this fertile physical power is the asset what keeps T-ara afloat of other girls groups like Miss A or SISTAR who do shine on digital sales but fall behind on physical sales.

While we still need to await the release of Sxxy Love to assess the real damages encountered by their current controversy, numbers shown so far prove that T-ARA IS MEETING EXPECTATIONS by leading the charts in 2012 with their habitual poise and longevity.

FacebookTwitter
SubscribeGoogleWhatsappPinterestDiggRedditStumbleuponVkWeiboPocketTumblrMailMeneameOdnoklassniki
Related ItemsBo Peep Bo PeepCry CryDay By DayI Go Crazy Because of YouLike The First TimeLovey DoveyRoly PolyT-araTTLWe Were In LoveWhy Are You Being Like This?wwhg2012
← Previous Story Who would have guessed? Super Junior sets monthly album sales records with 6th release
Next Story → Who would have guessed? Miss A makes a lukewarm comeback