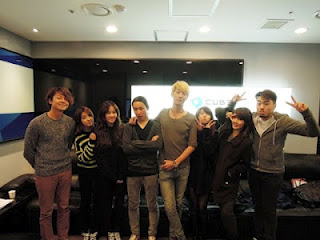 Who would have guessed? The KOXX banks on idols

In an industry dominated by hip hop and idol music, The KOXX are somewhat an exception. The most British sounding Korean artist has emerged, over the last few years, as the leading rock act of Korea. But, with rock music being a genre with very few amateurs in The Land of the Morning Calm, one hardly makes a living on it. However popular and critically acclaimed their releases have been, they always failed to chart at a significant position. The majority of indie groups make a living on live shows, as well as saving a lot on exhaustive advertisement campaigns and promotions. But rarely enough, comes an artist who decides to go mainstream behind-the-scenes. Despite conveying an image of being unconventional and revolted artists, the troublemakers of The KOXX have recently taken this step when they’ve accepted Miryo‘s offer to produce the first track of her debut album, Party Rock feat. Gary of Leessang and The KOXX. Shortly afterwards, The KOXX were at it again with the production of 4Minute‘s Dream Racer.

One can honestly question the motives of such decisions on either sides. For The KOXX, money is the word – there’s no wondering about it. As for Miryo, she stated knowing nothing about rock music until she watched The KOXX’s Trouble Maker MV and found it so cool, that she invited them on her debut album. Miryo, having a long history of indie background (and not exactly being an idol herself ) made the collaboration seem fair enough and actually kicked like a mule. But what about 4Minute’s choice and the way it was publicized?

For their fourth mini album, Volume Up, 4Minute tried a bit of diversity. While the final delivery, in my opinion, was nothing more than a monotonous mess, The KOXX’s participation to the production was greatly emphasized. It served as a teaser to the comeback and the song was also used as a promoted track. Dream Racer was forgettable but that didn’t matter, for it was a merely strategic move aimed directly at the critics. Cube Entertainment surely thought that mixing it up with the critics ‘protégés’ could have cast a positive light on 4Minute. And that may actually have worked, had the delivery been any interesting. Nevertheless, The KOXX made a good deal and enjoyed the release of a new album last June. As if nothing changed, Bon Voyage was as well received by the critics and amateurs alike, as it sold poorly.

In order to survive, you have to take the money where it is. As long as The KOXX continues to deliver such quality music as their last album, there is no room for complaints. It is rather sad though to think that they have to make a living by producing forgettable idol music rather than banking on their quality indie sound. Still, it is a SURPRISE, and one should just be happy that talented artists are cashing in on ‘some’ of their productions.