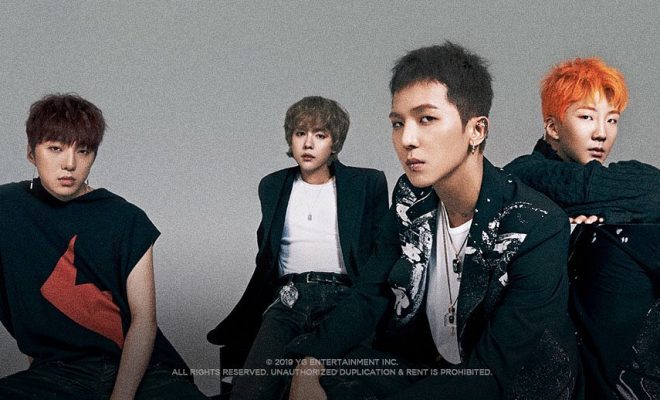 By Khriz Virgilio | May 11, 2019
FacebookTwitter
SubscribeGoogleWhatsappPinterestDiggRedditStumbleuponVkWeiboPocketTumblrMailMeneameOdnoklassniki

Continuously hyping up fans since last week, South Korean boy group WINNER has shared another teaser for their nearing release on May 15.

YG Entertainment has posted a new poster today for the boys’ highly-anticipated mini-album WE. Particularly, it unveiled the upcoming tracklist, which comprises six songs.

As previously revealed, the idols are set to introduce “Ah Yeah” as their latest title track. Aside from their lead single, they will also gift Inner Circles with three brand-new tracks such as “BOOM,” “I Do Not Know Too Much,” and “Animal Kingdom.”

In addition, there will be special bonus remixes of their previous hits. Receiving a lot of praises for their captivating song cover at JTBC’s Sugar Man 2 in May last year, the group will be releasing a new version of “First Love.” Fans should also look forward to hearing a transformed version of hit song “Everyday”.

The boys made it more special for fans as most of them personally wrote the song lyrics.  Mino took part in writing “Animal Kingdom”, while Seung Hoon participated in making the lyrics of their main song.

WINNER’s maknae-leader Seung Yoon was likewise able to show off his growth as a producer through his major contribution in their newest EP. Unlike their previous albums, he shared that this time, he wants to relay a refreshing story through their music by saying, “I have tried to write a love song that I have covered so far, but this time I have dealt with realistic feelings that a little more people are likely to feel.”

Meanwhile,  the group has announced that they will be having a live broadcast countdown. Inner Circles should get ready to join the boys in welcoming their new music through WINNER’s official VLIVE channel on May 15, 5 P.M. K.S.T.

Hellokpop, as an independent Korean entertainment news website (without influence from any agency or corporation), we need your support! If you have enjoyed our work, consider to support us with a one-time or recurring donation from as low as US$5 to keep our site going! Donate securely below via Stripe, Paypal, Apple Pay or Google Wallet.
FacebookTwitter
SubscribeGoogleWhatsappPinterestDiggRedditStumbleuponVkWeiboPocketTumblrMailMeneameOdnoklassniki
Related Itemsah yeahWeWinnerWINNER comeback
← Previous Story GOT7 Doubles Up The Excitement For May Comeback With “Insecurity” Teasers
Next Story → BVNDIT To Get “Dramatic” In Upcoming Digital Single