WJSN CHOCOME Teases With A Bright Track List For “HMPH”

The newly announced unit of WJSN, CHOCOME, is about to make its debut into the K-Pop scene next month. It already began giving small hints about what fans will see from them, starting with its first track list. 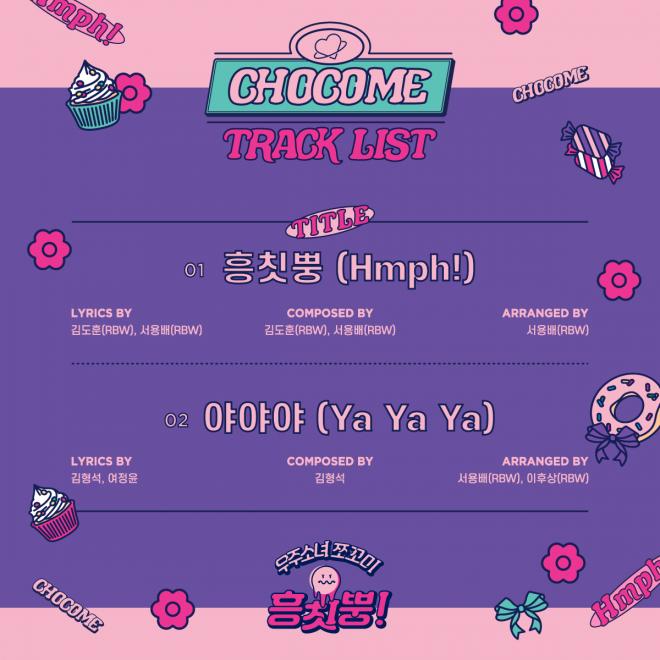 With the reveal of the group’s first unit, eyes are closely following on the details of its debut. Despite the members still unclear, fans are hyped to see what CHOCOME has in store for them.

The countdown began with the posted track list on September 24. As stated earlier, the girls will be releasing a single album called HMPH! and it will include the title track of the same name, as well as one more song.

In particular, producers Kim Dohoon and Seo Yongbae from RBW, known for working on other girl group pieces,  are the creators of “HMPH!”. Also drawing attention is the second song “Ya Ya Ya”, which is going to be a remake of the famous hit released back in 1998 by first-generation girl group Baby V.O.X. It will be reinterpreted in a lovely style, fitting for CHOCOME.

In addition, the image containing this information uses fun girly colors such as pink and purple. On top of that, there are sweet treats like doughnuts, cupcakes and candy, among the small flowers and ribbons.

Fans are eager to know which of the original group’s members will be in this unit. The wait should not be that long because the first concept images will be revealed on September 25. As the days get closer to the debut, fans will receive a music video teaser and album preview too.

WJSN CHOCOME is scheduled to drop its first single album HMPH! on October 7.