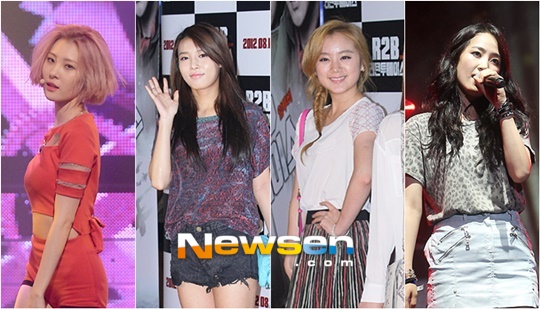 Wonder Girls Will Be Back!

Finally after a long hiatus of three years, Wonder Girls will be making its most anticipated comeback to the K-pop scene this August.

On June 25, JYP Entertainment made an announcement regarding the group’s comeback:

We foresee Wonder Girls returning in August. We′re preparing with an August 3rd release date as the goal.

From a six-member dance group, Wonder Girls will now enter in a fierce comeback battle this summer as a four-member girl band; Hyelim, Sunmi, Yeeun and Yubin.

JYP Entertainment shared the reason for the group’s big change:

Wonder Girls is a nine-year-old idol group. They have been active for a long time and have participated in diverse activities during that time. They discussed that they wanted to show a new side, that it′s time they tried reinventing themselves musically and began preparing to come back as a band.

According to the agency, each member will showcase themselves as a band by performing with different instruments; Hyelim will play guitar, Sunmi with the bass, Yeeun with the keyboard, and finally, Yubin on the drums.

In related news, the agency also responded to the report that Sunye will not take part in Wonder Girls’ coming activities:

It’s true she came to Korea recently, but it was for personal reasons, unrelated to Wonder Girls. She won’t be participating in this Wonder Girls comeback, but she hasn’t left the group.

As for former member Sohee, after her contract with JYP Entertainment expired in late 2013, she ended up joining BH Entertainment. Since then, the singer-turned-actress has been concentrating on her acting career.

Hellokpop, as an independent Korean entertainment news website (without influence from any agency or corporation), we need your support! If you have enjoyed our work, consider to support us with a one-time or recurring donation from as low as US$5 to keep our site going! Donate securely below via Stripe, Paypal, Apple Pay or Google Wallet.
156
SHARES
FacebookTwitter
SubscribeGoogleWhatsappPinterestDiggRedditStumbleuponVkWeiboPocketTumblrMailMeneameOdnoklassniki
Related ItemsBH EntertainmentHyelimjyp entertainmentlistquizSoheeSunmiSunyeWonder GirlsYeeunYubin
← Previous Story MINX Will Return With A ‘Love Shake’
Next Story → INFINITE Confirms July Comeback