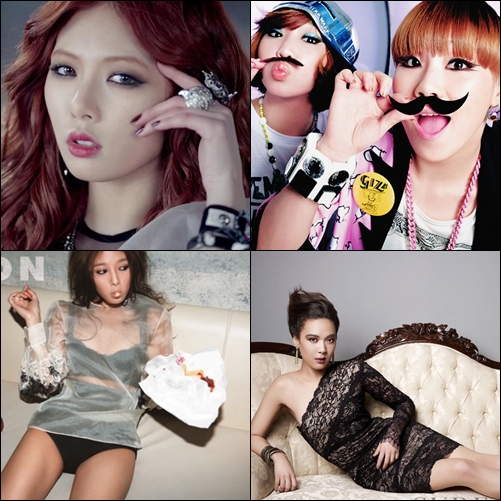 Hip-hop magazine XXL has released a short list of the most prominent female rappers in the K-Pop scene through their recent article Five Hottest K-Pop Female Rappers. The article starts off by mentioning about the immense success Korean pop has been receiving worldwide for the genre’s style of music, choreography, and fashion choices. XXL explains that although K-Pop is mainly based on pop culture trends and tunes, hip-hop also plays a significant role in the genre as each group contains at least one member who takes the role of the rapper. To conclude the prologue, XXL officially introduces their selection of the hottest female rappers.

The first rapper to be introduced is none other than 4Minute‘s HyunA. XXL shares that HyunA’s rapping skills may be doubted by many, but her persistence in releasing engaging tracks makes her a valued artist in the Hallyu Wave.

The second artist introduced in the article is 2NE1‘s Minzy. She is notorious for her skills in dance choreography and vocalization but can feasibly become a solo rapper. Being an artist under YG Entertainment, Minzy has the resources to improve her rapping abilities as the agency is influenced by hip-hop and R&B music.

Following Minzy is the Wonder Girls‘ rapper Yubin. XXL describes Yubin as ‘the perfect replacement’ for the Wonder Girls after HyunA’s departure from the group. Yubin regularly writes lyrics for the band and is featured on several songs by artists including Lee Min Woo and Kim Bum Soo.

XXL refers to 2NE1’s CL as the whole package in the K-Pop scene. She possesses all of the desired traits: charisma, rapping skills, and distinct power vocalization. CL is able to formulate lyrics in various languages including Korean, Japanese, English, and some French.

The last but most extolled female rapper to be introduced is Tasha Reid better known as Yoon Mi Rae. Tasha made her debut at the age of 16 and is considered as the number one female rapper in Korea. She serves as an influence to many artists and has been acknowledged by artists including John Legend and Amerie.

Do you agree with the rappers they’ve chosen?